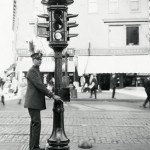 According to History.com, the world’s first electric traffic signal was put into place on the corner of Euclid Avenue and East 105th Street in Cleveland, Ohio on August 5,1914.  That’s a century ago!

It sounds like Lester Wire actually installed the first signal with electric light bulbs in Salt Lake City, Utah in 1912 and the very first non-electric traffic signal was installed in London, England in 1868.  At least according to the Wikipedia page about traffic signals.

On August 5, 2014, the first PATENTED electric traffic signal was installed.  Good enough for me.