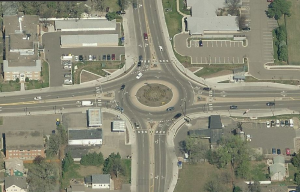 One of the first multi-lane roundabouts in Minnesota was built in 2008 at Portland Avenue and 66th Street in Richfield, MN.  It replaced a high crash signalized intersection with a safer roundabout, but crash rates at the intersection turned out to be higher than expected based on national data.  The roundabout got some bad press and city staff/residents were frustrated with it.

The Minnesota Traffic Observatory at the University of Minnesota was brought in to study the situation.  After observing the operations, they found people weren’t driving the roundabout properly – there was a high incidence of lane changing and people choosing the wrong lane for their exit point.

They were able to cut incorrect lane choices by 53% with two simple/cheap changes:

p.s. The Observatory recorded/watched more than 200 hours of before/after videos to figure out the problem and then determine the efficacy of their solution.  I like it.