Remembering the 2007 Bridge Collapse in Minnesota 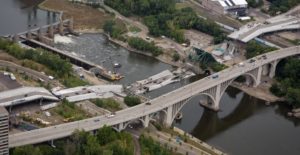 On August 1, 2007, the previously unthinkable happened and the Interstate 35W bridge over the Mississippi River, in Minneapolis, Minnesota collapsed during rush hour traffic. The collapse of this bridge, that I drove over frequently, killed 13 people and injured another 145. Rather than focus on the collapse this anniversary, including the causes and associated issues like transportation maintenance funding, I’d like to share the positive responses to this tragic event: 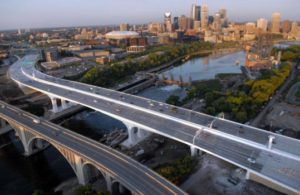 On September 18, 2008 the new bridge opened in just over 13 months from the fateful day – an incredibly fast pace for such a large unplanned removal and replacement construction project. I was a consultant traffic engineer, working on the traffic control during construction and designed the permanent traffic signals on the local road. I feel fortunate to have had the opportunity to work in a small part in the redevelopment of this bridge that pulled together a community. A true silver lining.

Many positive things can be accomplished in the face of a tragedy when we all work together. Imagine what we can accomplish if we work together all the time.