OK – that’s a bit harsh.  They do work as access control and they usually improve traffic flow/reduce crashes.  But some people still turn left out when they’re “prohibited.”

I was just reminded of this on a count we did at 66th/Barrie in Edina, MN (aerial below).  It’s a beefy 3/4 access with curb and gutter median partially blocking the southbound to eastbound left movement.  We counted the intersection from 6:30 to 9:30 a.m. and 3:30 to 6:30 p.m.  We found 11 people made the illegal left turn lane over the six hour period.  We also had one person make a crazy westbound to eastbound u-turn illegally through the intersection. 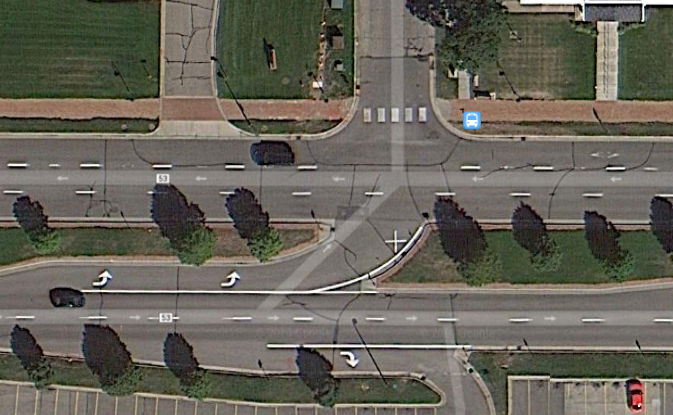 Last year we were working on a 3/4 access where we had a lot of illegal left turns.  We recommended putting pylons down the lane line to physically prohibit the movement, per the figure and photo below.  The city wanted concrete curb and gutter instead of the pylons and the development project hasn’t been approved yet.  The pylons have a huge advantage in dealing with storm water – plus I’m a minimalist/experimenter at heart.  We’ll see what happens on that project.

The punchline is that we need to go to pretty extreme measures for a 3/4 access to block the prohibited left turns.  When space permits, that should include a triangular median on the approach road to force the cars to turn right. 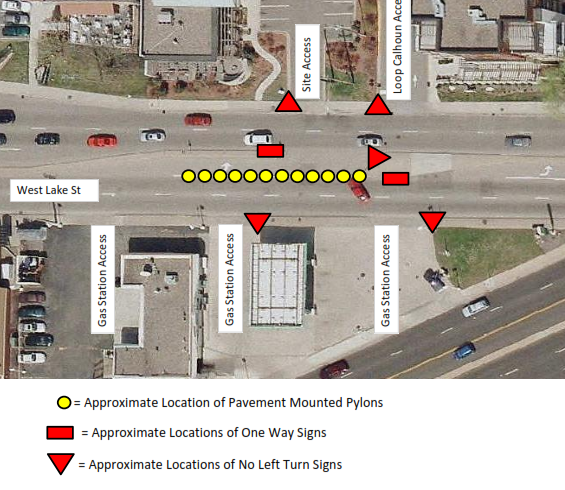