As mentioned earlier, the 85th percentile speed defines the speed that 85 percent of drivers will drive at or below under free-flowing conditions. Most people don’t drive according to the posted speed limit, but account for the visual aspects of the road and a ‘feel’ for the road. The visual factors that influence speeds can include:

The ‘feel’ for the road can be as simple as being the regular route that someone drives for years. For example, on a recent trip to California I was driving along Highway 1, an extremely scenic and windy, 2-lane un-divided roadway along the ocean. I felt like I was driving a fast pace, however the local Fort Bragg in California, traffic thought otherwise, zipping past me at a speed I would definitely have been uncomfortable at traveling along the specific roadway.

With so many factors impacting the speeds on a roadway, the 85th percentile speed becomes a good metric that can quantify these variables and put them into one useful number. There are two main techniques for collecting this data, directional tube counts and handheld radar.

So how is the 85th percentile speed determined? By the completion of a spot speed study test. For a Spack Consulting project located south of Hibbing, Minnesota on Trunk Highway 73, roughly 100 free flowing vehicle speeds were collected over a two-hour period using handheld radar. These speeds were then plotted to create the following figure. 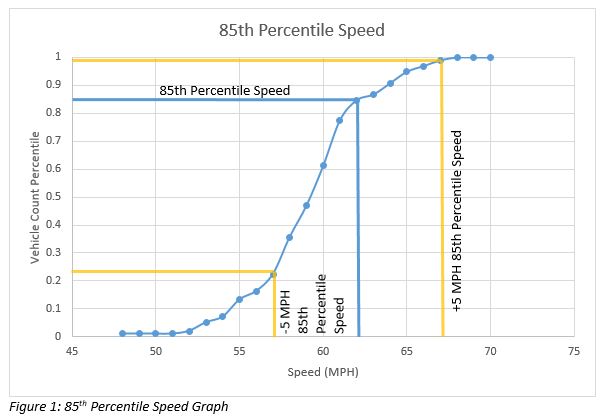 This uniformity of vehicle speeds increases safety and reduces the risks for vehicle collisions. When vehicles deviate from a standard speed, either faster or slower, the potential for accidents increase, whether caused by a slow car in a rear end collision or a fast car completing lane changes to maneuver through slower traffic. By setting the speed limit to the 85th percentile speed this uniformity is achieved and safety is increased.

In our previous example, a 60 MPH speed limit would be recommended because speed limits are set in 5 MPH increments. 60 MPH was chosen over 65 MPH due to the current roadway speed limit of 55 MPH, the 2-lane layout of the road, and lack of separation between opposing traffic flows. The 85th percentile speed justifies this change and helps assure that it is a safe and strategic speed limit change.