The Florida DOT hired the Center for Urban Transportation Research (CUTR) at the University of Florida in Tampa to analyze internal capture rates at nine mixed use site in Florida.  Brian Bochner of the Texas Transportation Institute was a sub-consultant on the project to help ensure consistency with the previous major analysis of internal capture rates – NCHRP Report 684. 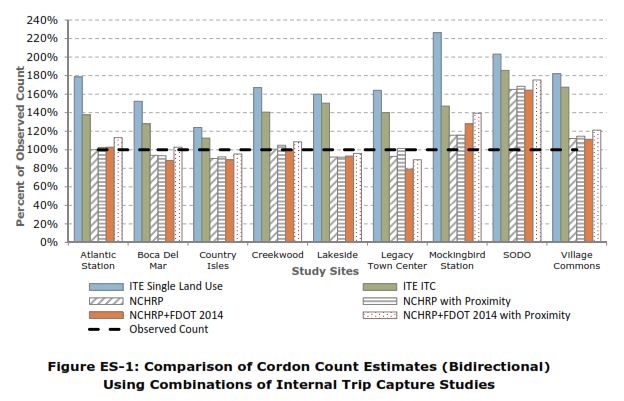 If you forecast traffic, you should check out the full report – FDOT-BDK84-977-10-rpt.  Overall, they found ITE Trip Generation Manual based traffic forecasts for mixed use developments should be discounted 13-16% in the p.m. peak hour and 9-14% in the a.m. peak hour.

The report describes the study methodology in detail and makes several recommendations.  The following finding made me think of the usefulness of camera systems like the Miovision Scout or the COUNTcam –

Performing door counts at as many establishments as possible allows the capture of activity data at the site. This gives more flexibility on data analysis, since the survey data can be expanded to the entire MXD based on activity levels in the trip factoring step.

This is a great addition to the literature and is very useful for our profession.  I wish they would have also compared the US EPA Mixed Use Trip Generation Methodology.  Maybe there’s a grad student out there that wants to dive into the dataset for their thesis.