Four-lane undivided roadways are the most unsafe road type out there today (at least as measured by MnDOT highway crash stats here).  Urban four-lane undivided facilities in particular have a higher crash rate and severity rate than two-, three-, and five-lane roads whether urban or rural.  Beyond that basic stat, we also know that a conversion from a four-lane undivided road to a three-lane facility (one through lane in each direction with a center, two-way left turn lane) provides a host of safety benefits without negatively impacting operations (see studies here and here).

As I drove around my hometown of Roseville, MN one day, I noticed there seemed to be a lot of four-lane undivided roadways.  This made me wonder if the City could be significantly improved by converting one or more of them to three-lane roads.

To that end, I completed a small exercise to determine if there were roads that could undergo a “road diet” and switch from the current four-lane undivided design to a three-lane design.  In about two hours, I managed to complete the following three steps that showed the possibilities.

The result is a map that suggests where a road diet could occur.  As shown below, 23 different segments were identified as potential candidates.

Does this mean all 23 should be re-striped tomorrow? Absolutely not.  Other factors need to be reviewed in more detail, such as the number of access points, crash history, parking, intersection operations, and what happens to the road on each end of the segment.  However, in about two hours, I have now provided the City Engineer a great starting point for increasing safety in the City (and potentially adding bicycle lanes on top of it!).

Mike’s Take:  I followed up with Marc Culver, Roseville’s Public Works Director/City Engineer.  He really appreciated this, although he pointed out most of these corridors are Ramsey County roads and he needs to work with them to get these roads converted.  Also, as a consultant – this is a great value add if you’re trying to market to a city or county. 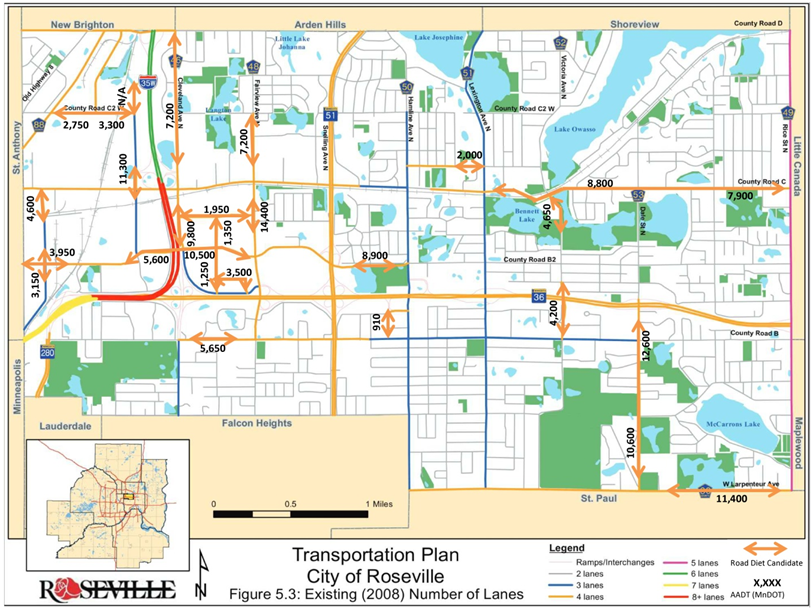