Are Bicycles Vehicles Too?

Cars, commercial trucks, motorcycles and bicycles all share the road, but only one of these vehicles is not tested on any standard motor vehicle license exam.  I’ll give you four guesses and the first three don’t count –

While semis and motorcycles are two vehicles the average person will not drive in his or her lifetime, most everyone has ridden a bicycle.  Bike sharing systems, like Nice Ride, are popping up in major cities all over the world and bicycling is becoming a much more popular mode of transportation.

The Washington Court of Appeals negated both issues by stating that “roadways include bike lanes and the definition of a “vehicle” includes anything that is capable of being moved and/or transported, meaning bikes are also vehicles.” (Borromeo v Shea.  138 Wn. App. 290. 2007).

So the answer is – bicyclists are already considered to be driving a vehicle.

This is a legalistic answer.  We transportation engineers need to focus on building systems so vehicles and bicycles can better coexist on our streets. 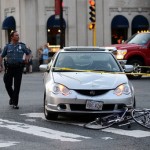 A huge gray area in our profession is that conflict point where a bike lane comes up to an intersection.  How do right turning vehicles interact with bicyclists?  There is a Uniform Vehicle Code (UVC) national standard adopted by FDOT:  the law requires right-turning motorists to merge into a bike lane before turning right.

Some in our profession suggest we stripe the bike lane with broken lines to convey the message to motorists that they can merge into bike lanes.  That’s a good first step, but education has to play a role in this debate.

Currently, there are no state motor vehicle license exams that include bicycle safety questions.  Fred Oswald, a mechanical engineer and a cycling safety expert, thinks that should change and has come up with some sample questions.

I agree – it’s time we started including bicycle related questions on our driver’s license exams.  I’m not sure we should go so far as to require on the road bicyclists to be licensed though….