We collected trip generation data at four big box retailers in Minnesota over the Black Friday retail sale event in November 2015.  We also collected data at the same stores during a normal week during the winter in 2016. You can freely dig into the data at TripGeneration.org.

Below are summaries of the peak hour and daily rates we collected in addition to the standard ITE Trip Generation Manual, 9th Edition rates for a Free-Standing Discount Superstore.  ITE doesn’t provide Friday data, so we decided to include their data from Saturdays as a reference point in the charts because they’re busier than a standard weekday. 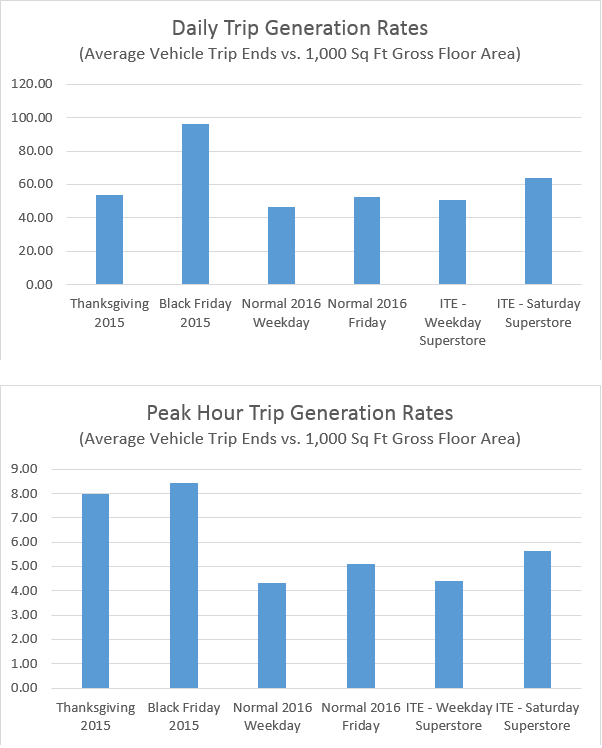 On a daily basis, the Thanksgiving Thursday and Black Friday Sales traffic was about double a normal day at the same stores.  The “normal” daily trip generation at the four sites we studied produced about 20% less traffic than would be predicted based on the ITE rates.

During the peak hour, the Thanksgiving Thursday and Black Friday traffic was also about double a normal day at the same stores.  However, the “normal” peak hour rates at the four sites we studied were about the same as the standard ITE rates.

The ITE Trip Generation Manual, 9th Edition has no data related to Black Friday and little data related to seasonal retail trip generation.  Under the Shopping Center land use code, they show December’s rates being 141.8% of the rates during an average month.  That’s based on only two sites whose data was collected between the 1960’s and 2000’s.

The Texas Transportation Institute (TTI) did a thorough study of Walmart trip generation data in 2009.  They didn’t publish data related to Black Friday because they considered that the peak of the peak and not something that should be designed for.  TTI broke out December seasonal factors for many different days/hours and found Walmart’s to have normal to 20% more traffic in December compared to an average month, depending on which periods were compared.

TTI’s stance is that we don’t want to build public roadway infrastructure to accommodate Black Friday traffic near retail areas.  I agree with that, but the data could be factored into area signal timing and should play a role in determining adequate parking at these facilities.

We teased out parking data from the traffic counts by assuming zero cars parked in the lot at midnight and then trending the ins/outs over the course of the day (not 100% accurate, but in the ballpark).  Below is a chart of the peak parking rates at our study sites. 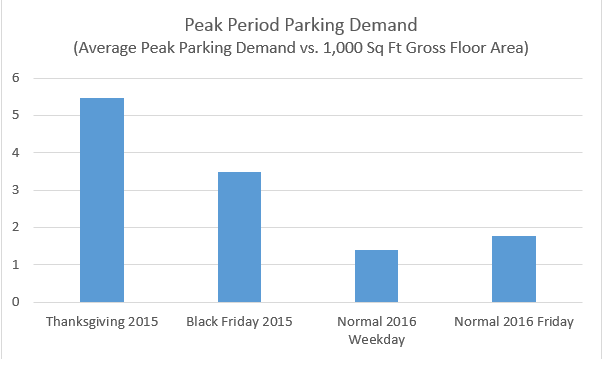 Most Big Boxes provide approximately 5 spaces per thousand square feet.  This seems appropriate for the peak of the peak on Thanksgiving based on our current, admittedly limited, study.

The take away from our study – large retailers and shopping center management groups have options for accommodating high volume periods of time, such as Black Friday, with changes to signal timing; and with only a few data points available in the ITE Trip Generation Manual for Shopping Centers, it is critical for developers and city engineers to collect localized data to make the best decisions for these land uses.

Are you interested in other trip generation data that we have collected? Download a copy of our data at TripGeneration.org.

Have you collected traffic data for shopping centers? We would like to hear from you! We are looking at expanding our research for this land use and are looking for others interested in collecting data from their region. Email us if you are interested in working with us to collect data.