Build It and They Will Come – How Road Widening Induces Demand 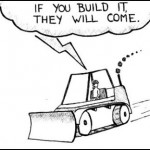 I experienced that in Maple Grove.  We’d widen a road and the traffic volumes would spike nearly to our twenty year forecasts.  It’s also why you see very little traffic growth in a city like Minneapolis even though the population is growing.  No capacity is added to the roadways in Minneapolis, so people figure out how to get around on foot/bike/bus or they just travel during off peak times.

The Wired article closes with a description of how San Francisco is using dynamic pricing on their parking to push people to park for less time or go in to town when it’s less busy (cheaper).  That’s an interesting way to shift demand since the voters shot down road tolls in San Francisco.

The article mentioned there are 440,000 public parking spaces in San Francisco.  That’s astonishing.  A standard parking stall is 18 feet long, meaning they have 1500 miles of parking stalls if they were laid out end to end (about the distance from San Francisco to Omaha – halfway across the U.S.)

If you want to dig in to induced demand, Todd Litman at the Victoria Policy Institute has a good paper on the topic – Generated Traffic and Induced Demand.  You can also check out Roger Gorham’s article Demystifying Induced Travel Demand.