Minnesota’s Transportation Conference took place March 1st through 2nd 2017 at the Saint Paul RiverCentre. The event included more than 30 breakout sessions discussing all things transportation. During this event, I attended an interesting presentation by Derek Arens and Chris Chromy from Bolton & Menk, Inc. The presentation focused on intersection design and some lessons learned throughout the years with regards to over building of intersections and how to build an intersection to meet today’s demand, while leaving the potential for future expansion when volumes permit. The following is a summary of the main takeaway points that stuck with me. The full PDF version of their presentation can be found by clicking on this link.

Efficiency of an intersection involves more than traffic capacity and demand: There are many factors that influence the efficiency of an intersection. As traffic engineers, we often focus on the traffic capacity/demand as the main factor involved in this efficiency. However, there are more contributors that should be included in the overall intersection “efficiency”, such as the cost of construction, opportunity for construction funds, ease of maintenance, overall safety, and expansion potential. When all of these factors are taken into account, an efficient and smartly designed intersection is the result.

Do not get blinded by the traffic forecasts. Sometimes if you build it they will NOT come… (sorry I had to). When designing an intersection, it is easy to get distracted by the projected growth in an area. This projected growth can be very significant in suburban areas and is magnified even more when looking at 20-year and 40-year forecasts. However, when we design opening year roadway layouts for the 20 and 40-year traffic volumes, we leave ourselves vulnerable for creating overdesigned intersection which waste money, increase maintenance cost, and create unnecessary safety concerns for pedestrians and bicyclists. A few local examples of this overbuilding include:

TH 60 in Faribault, MN. The intersection of Morristown Boulevard and 38th Avenue was constructed and expanded to account for potential additional developments. During this upgrade the intersections was set up with signal poles for future signalization and expanded to two thru lanes with left and right turn lanes along Morristown Boulevard as well as left, thru, and right turn lanes along 38th Avenue. The proposed developments never occurred and the intersection is currently well under capacity, with an existing AADT of roughly 9,000 vehicles per day and operating as a side street stop controlled intersection. 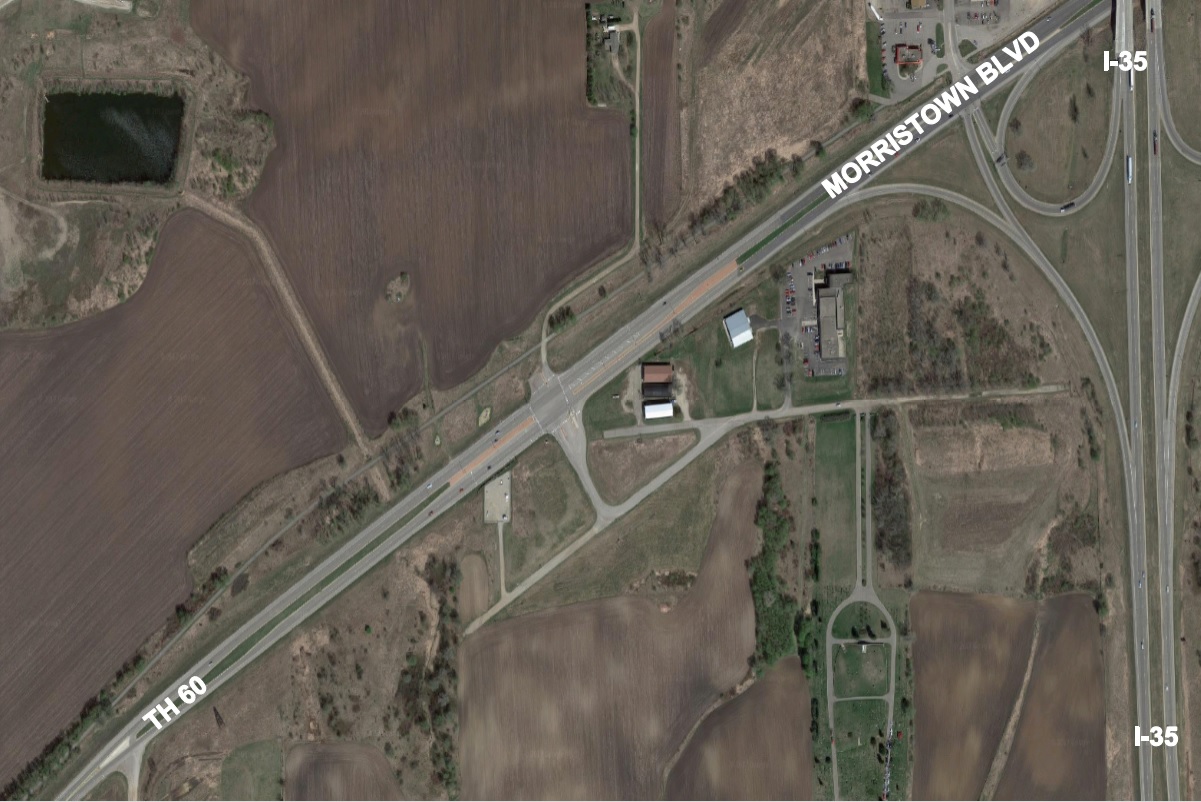 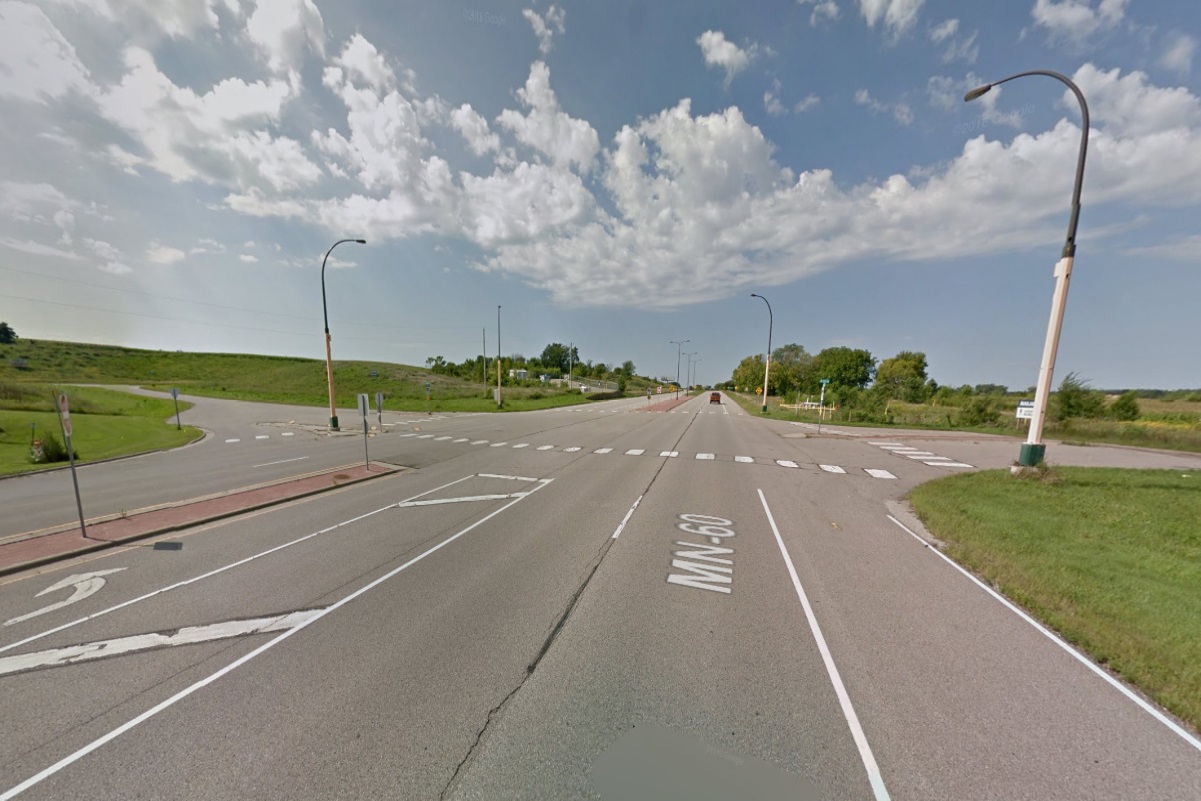 Elk Run Interchange in Pine Island, MN. This interchange and adjacent roundabout configuration was set up for projected volumes caused by various proposed developments. These projected volumes resulted in full two-by-two roundabouts being constructed with diverging diamonds at the interchange intersections. Again, these proposed developments have not occurred and now CSAH 12 carries an AADT of less than 3,000 vehicles per day. 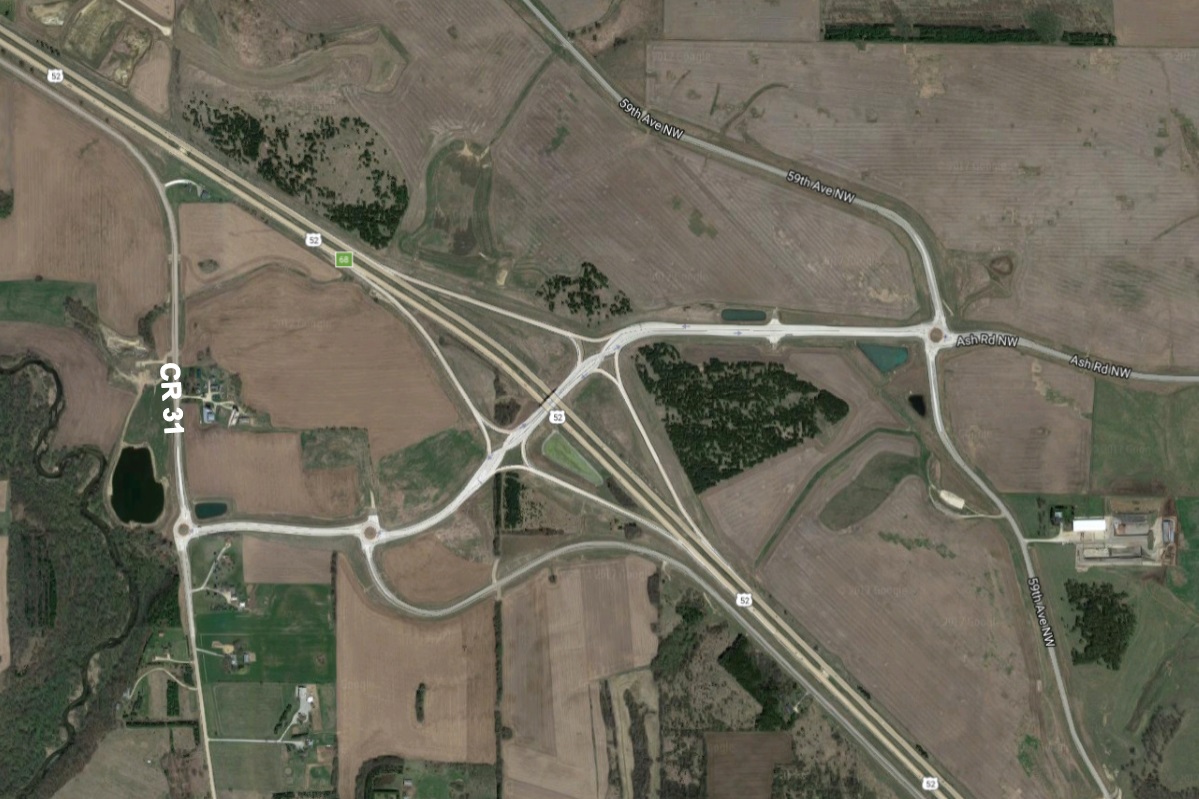 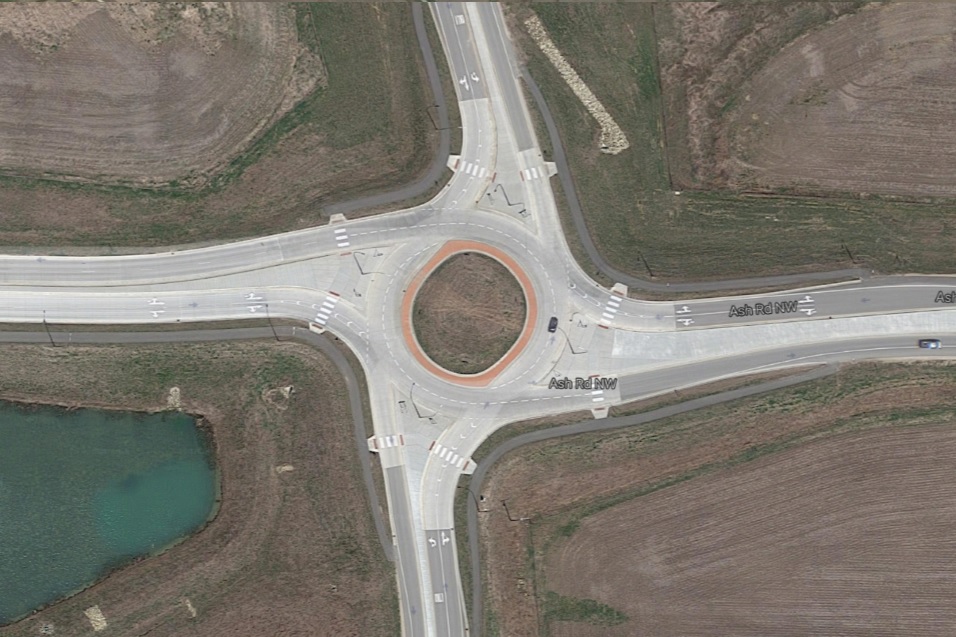 Design expandable intersections to minimize the chances of overdesign.  A few relatively simple steps can be taken to help create an intersection which is sufficient for opening day capacity and expandable to the 20 and 40-year forecast volumes for when/if they occur. Set sidewalks/trails and utilities outside the possible expansion zone to save money on sidewalk/trail and utility realignment during future expansions. Also, when designing roundabouts work from the outside in to assure sufficient right-of-way is purchased. The proposed TH 5/Orchard Road intersection shows this technique. Initially the roundabout can be designed with a single lane approach. As shown in the image below. 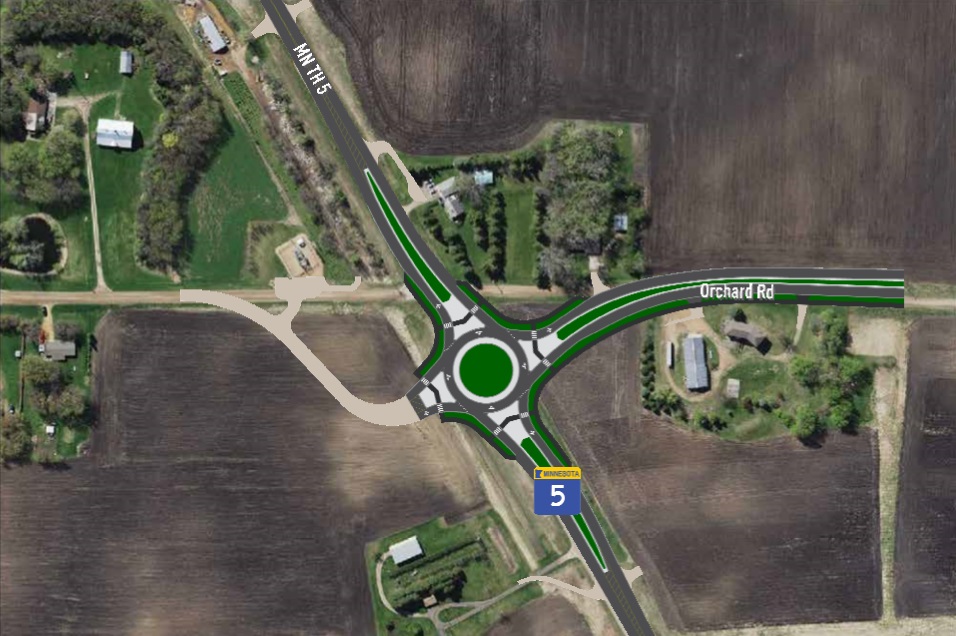 Once volumes increase along the roadways the roundabout can be expanded inward by shrinking the center island and creating a two-by-one roundabout, as seen below. 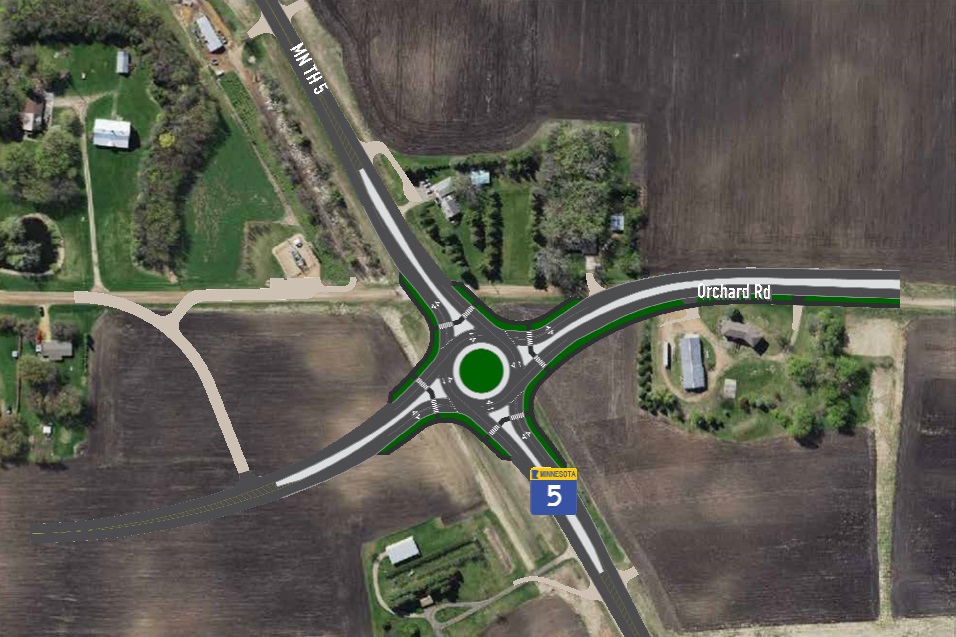 This flexibility can also be achieved with signalized intersection which is shown at the TH 41/Hundertmark Road intersection. Here, through the use of strategic pavement markings, the western leg of the intersection can expand from a single through lane to double through lanes, while an additional northbound left turn lane can be added by removing and restriping the intersection. The images below show the opening day and proposed expanded layouts. 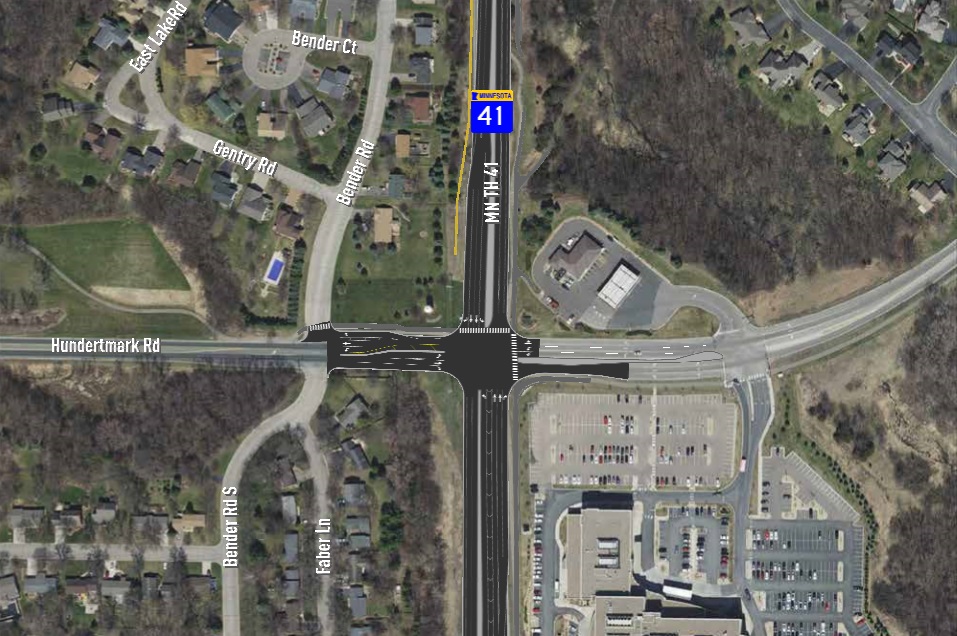 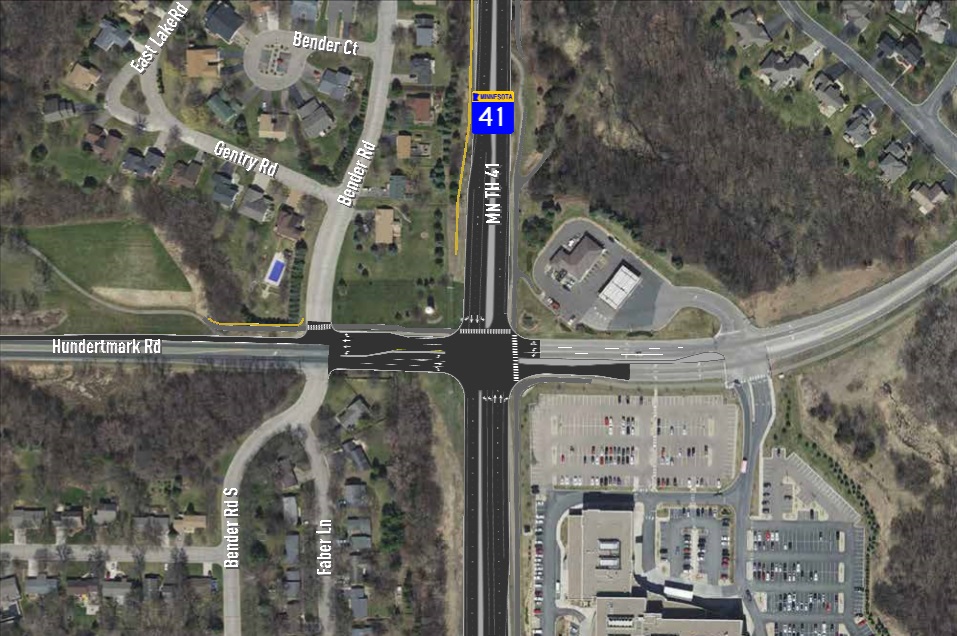