Recently, I wrote about MikeOnTraffic celebrating its 10th anniversary. The success of MikeOnTraffic has helped me work toward’s my personal goal of sharing my knowledge to help improve transportation globally. The blog has also helped me spread the word about how to cost-effectively collect traffic data so transportation professionals can make timely decisions using current, relevant data.

Each week during October, I am sharing some insights about each of my companies,
and providing my readers with a variety of free and discounted items to help me celebrate our 10th anniversary.

I was an intern at Image Sensing Systems, inventors of the Autoscope video-based machine vision traffic signal control system, in 1995 and wondered why our industry didn’t use video cameras for turning movement counts.  About three years after I started MikeOnTraffic, my company Traffic Data Inc (TDI), became one of Miovision’s, first clients as a realization of that earlier intuition to use video-based turning movement counts.

I liked the guys at Miovision, and their traffic video recording system worked, but I realized I was sending all of my profit to them instead of keeping it.  Seeing how Miovsion created a camera system gave me the confidence to start dabbling with off the shelf DVRs, pelican plastic cases, security cameras, and car batteries.  I wasn’t trying to invent an automated counting system, but saw the benefit of recording traffic at intersections and completing the counting in the office vs. getting people on the street at 6 a.m. to count traffic.

My first video recording system had about a 50% success rate (I tried to stay positive). Despite the high failure rates with the first system, I was already saving effort at Traffic Data Inc. by not paying to mobilize a crew to sit at an intersection and count cars, and the unit cost to create the hardware was more affordable than other products on the market.

So, it was back to the drawing board, which was in my garage, to rework and refine the video recorder. The TDI team was determined to create a product that would reduce the amount of time we spent in the field counting cars, and allow us to collect more data for better analysis. We even enlisted the help of other traffic engineers involved in traffic data collection to get their feedback on the products as well. Soon we had a stable product that worked reliably and we named it COUNTcam.

What we learned during our development and testing, was that others wanted what we were developing.
What started as developing a tool to help us with our own work, evolved into a tool other traffic engineers wanted.

Two years after developing our first prototype product, we launched CountingCars.com in 2011 and started selling our COUNTcam traffic video recorders and other traffic data collections products. We now have more than 2,000 customers world wide using our data collection products. (Check out some of our fun facts in the infographic) 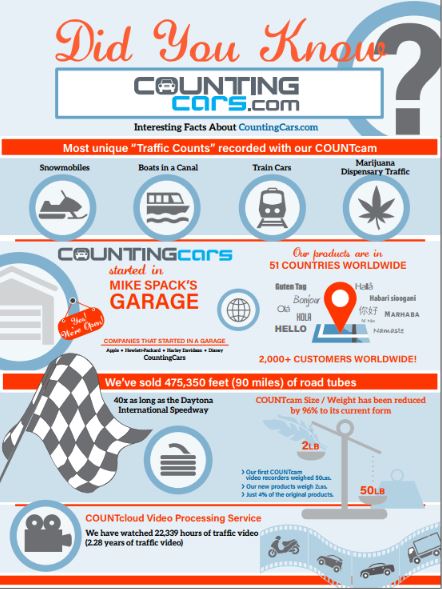 While some may see CountingCars.com as just an online store, I see it as an extension of my mission to help improve transportation globally. I believe that finding a solution for our own data collection needs, lead us to a solution that let us collect data for multiple days at a time. Now we, and other engineers using our products, base our decisions not on a single set of a.m. and p.m. peak hour data, but on multiple days of data. More data leads us to better problem solving and engineering decision.  And that’s progress!

Each day we look for new ways to improve our products and find new data collection solutions that will help us be better traffic engineers. With our innovations, we help others in their engineering practices as well.

What does the future hold? Well, let’s just say there are new innovations on the horizon that will help reshape how we collect and use traffic data. The future is looking very bright!

A Timeline of CountingCars Innovation

It’s our 10th Anniversary – But the Gifts are for You!

Each week in October, we will be offering free and discounted items for our readers.  Here’s this week’s gifts for you.

Free Traffic Video Count. Attend a COUNTcloud demo in October and receive a free traffic video count. COUNTcloud is our traffic video processing service. It’s easy-to-use, and affordable. And the best part…there are no contacts to use our service!

FREE Guides: Download three of our most popular engineering (as rated by our readers!)

50% off Your Entire Purchase at Spack Academy.  Now through October 31, 2017 get 50% off your entire Spack Academy purchase when you use code MOT10 at check out.