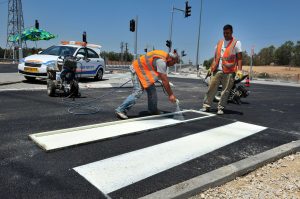 At its root, the safety concerns at the crosswalks are the result of conflicts between two types of transportation – walking and driving. These two transportation options operate at different speeds with different characteristics. Controlling the conflict points between these two can be accommodated in a variety of ways and we have developed the following checklist to review when examining crosswalks:

The following are short overviews of each of the four that we use as guides when looking at crosswalk safety improvements. I have also created a guide “Top 9 Guidelines for Bicycles & Pedestrians” which explores considerations to successfully integrate bicycle and pedestrian activity into developments. This is a free complementary piece that you can download here.

Eliminate and Reduce the Conflicts

The safest method to improving conflicts between pedestrians and drivers is to remove them from each other’s path. This could be accomplished by providing bridges or tunnels to separate the movements, which can be effective if everyone uses what is provided. Other ways to accomplish this could be shifting a road, moving a sidewalk/trail connection, or re-routing traffic to another area. The less opportunity for conflicts, the greater the safety will be. Eliminating and reducing pedestrian and vehicle conflicts is often the costliest (although often the most effective) solution, which is why we also consider other safety options.

At a standard crosswalk of a two lane road, pedestrians are exposed to traffic for approximately 24 to 32 feet depending upon the width of the drive lanes. For a crosswalk at a four-lane road with turn lanes, the crossing distance could easily be 100 feet or more, which is a long distance and time for pedestrians to be susceptible to cars. Taking another look at the lanes and lane widths provided for cars can be helpful for pedestrians. Using ten or 11-foot lanes can reduce the distance a little bit. Really examining whether a road needs four-lanes or that right turn lane at the intersection can reduce the distance significantly. We have seen the crossing distance reduced by close to 20 feet without significantly impacting vehicle operations. The shorter the crosswalk distance, the less exposure to traffic and safer the crosswalk will be.

Often, the lane or lane width reductions occur with the revision of a corridor where all the striping and/or curbs can be redone. For a crosswalk, it’s also important to keep in mind that this reduce could occur just for the crosswalk. For instances, using large planters that restrict the roadway width can be used around a crosswalk impacting roadway width for that crossing only, and without impacts to drainage or other factors of the road. As a bonus, this small reduction in width can be helpful in reducing vehicle speeds, too.

Increasing awareness can be completed using traffic calming methods, street signs or pavement markings, or campaigns for drivers and pedestrians. Traffic calming measures include speed humps or raised crosswalks. The abrupt change in pavement elevation forces drivers to slow in the area, creating a safer environment for pedestrians. The Manual on Uniform Traffic Control Devices provides for several methods of increasing the presence of crosswalks. White zebra striping, fluorescent-green warning signs, in-street pedestrian crossing signs, and flashing warning lights are some ways to make the crosswalk more pronounced for both pedestrians and drivers.

This checklist keeps us focused on the big picture and provides us with an order of review without getting lost in specific improvements. In some cases, we have been successful in removing the conflicts, our first check on the list, which will be much safer than any sign could be.

What crosswalk improvements have used to successfully improve pedestrian safety? We would love to hear from you!