Number 4 on my list of things a new city traffic engineer should do is develop a process for how you are going to respond to speeding complaints and stop sign requests.  When Ken offered me the traffic engineer job in Maple Grove almost fifteen years ago, he told me my number one task would be to act as the complaint department.  Wow was he right!

Once the weather turned nice in the spring, I was hit with a dozen complaints.  I think parents were out playing with their kids and every car seems to be going too fast when you’re out by the street with your child.  The complaints often cited people going at least 50 mph.  The residents were also kind enough to usually offer the perfect solution – install all way stop signs on their corner.

As a rookie, I scheduled a time to meet with each one of them in front of their house to talk about the issue.  Then I’d end up getting tube counters installed to collect volume and speed data.  The data would come back with reasonable speeds and the 85th percentile speed being very close to the 30 mph speed limit.  The intersections wouldn’t meet warrants for all way stop sign control.  I’d write a letter back to the homeowner saying there wasn’t a problem and we weren’t going to do anything.  Usually, I didn’t hear back but I did get a couple of not very kind replies.

This was time consuming and I didn’t make the residents happy – a double whammy.

Over time, I developed a multi-step process.  First step was that I would email them a short form for them to fill out.  I asked them to give me the following information –

This cut out about half of the complaints because they wouldn’t send me back the form.  If I did get the form back, I’d let them know approximately when we’d be collecting data, the types of analysis I’d be doing, and when I’d get back to them with my findings/action step.

The vast majority of the time there wasn’t an issue by strict traffic engineering standards, but I hated responding back in that way.  Luckily, I had some discretionary funds and was able to buy a portable radar trailer.  Based on before/after speed studies I did, I don’t think these trailers have any long term impact, BUT, they’re a nice placebo. 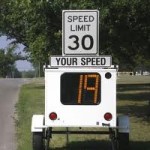 I’d let the resident know that we weren’t going to do anything permanent (signs, traffic calming, etc), but I’d explain the speed radar trailer program and that we’d be putting it for a couple of days at their “problem” location.  I let them know the dates and told them they could monitor the speeds and send us license plates of speeding vehicles if they wanted to sit out there and log the data.

I worked it out with the police department that they’d send a reminder letter to the owner of the car letting them know what the speed limit was on the street and that they were recorded doing xx mph at a specific date/time (thinking we might be notifying parents of a speeding child).  Not a single resident ended up recording license plates.  Putting the radar trailer out did seem to buy goodwill though.

As a local government traffic engineer, these complaints/requests can eat up a lot of your time.  I recommend you develop a streamlined, but respectful process for dealing with them.  You could certainly setup a web page with information on your program and a request form to streamline the whole thing even better (things have advanced a lot in the last twelve years since I left Maple Grove), like this one.

I have also developed The Engineer’s Guide to Citizen Traffic Requests that includes all of the frequently requested traffic requests I’ve encountered and citizen correspondences to help traffic engineers streamline their internal processes. You can download a free preview copy at Spack Academy when you click the link. 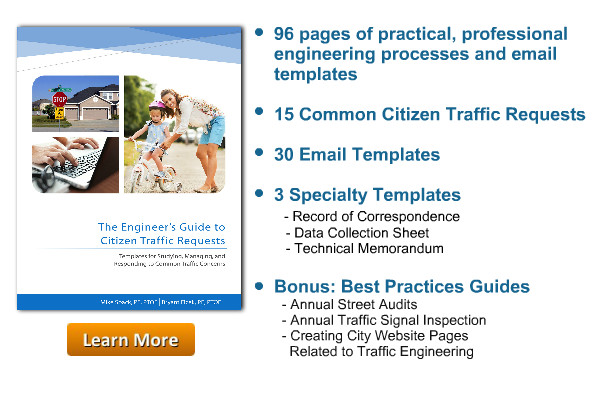