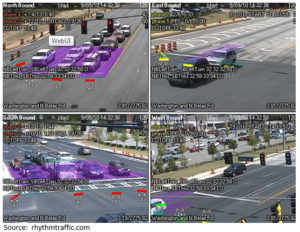 I’ve talked to several people in the industry with knowledge about the InSync System and there appears to be two technical issues with the current system:

Two years ago I met Reggie Chandra, the founder and visionary of Rhythm Engineering.  I’m a believer in Reggie and I think he will get these issues resolved.  I’d still be looking at adaptive control, including InSync, if I was in control of a traffic signal system around a mall, college campus, or sport’s stadium.  I’d also be looking at installing adaptive control if I was rebuilding the signals along an entire corridor.

But since I wrote positively about the InSync System in the past, it’s my responsibility to give you the inside scoop so you can ask questions if you’re considering the InSync System. I am confident that Reggie Chandra’s team will eventually resolve these issues.