After the Recommendations: What to Do When an Issue Needs Fixing Now 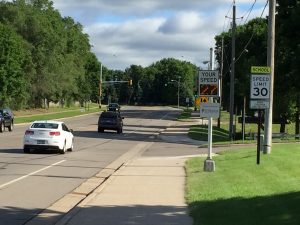 You could break down every traffic study into a very generic process:

At this high level, most studies of anything fall into this pattern. For many of us traffic engineers, particularly consultants, we prepare our reports with recommendations, potentially present the project at an open house or an agency’s council/board, then sign off. The study then becomes part of the City, County, or State’s responsibility to act on the recommendations.

Ideally, your prescribed mitigation is then handled either with construction of a development, concurrent with another construction project, or programmed as a stand-alone project. In the vast majority of projects, this works. In a small minority, however, the ultimate improvements will not be completed for several years and you have identified a safety issue that needs to be fixed now.

So is there another step necessary beyond your recommendations?

First, identify if you are in this situation. Identifying existing issues is straight-forward and should occur with your review of the base information. Determining the timeline on your mitigation is a tougher issue that requires good communication with the governing agency. If you determine or think there is a significant gap until your ultimate recommendations will be constructed, then take the next step of considering additional measures before your recommendations.

For our projects that fall into this category, we like to think of low-cost interim improvements. These are also usually actions that could be implemented by an agency without the need for a big design plan. The Manual of Uniform Traffic Control Devices (MUCTD) has a wealth of options and guidance, such as:

Imagine a situation where existing poor operations and a history of crashes at a couple adjacent intersections have led you to recommend closing the median at one intersection along with the installation of a roundabout at the other intersection. Per design time and funding restraints (which includes allowing for new development to occur and contribute to the project cost), these improvements will not be completed for at least two years.

An interim answer for those two years might be using construction barrels to ‘close’ the median at one intersection and installing all-way stop at the other intersection. Barrels and signs are not expensive and easy to install (and remove when the actual project is ready to begin), but could immediately improve the safety of this example before the ultimate recommendations are implemented.

Ultimately, approval of any short-term action will come through an agency and may need a Council or Board approval, just as your ultimate recommendations would need. But consider it part of your job to identify these gaps when they occur and include interim options as necessary in your recommendations, either as part of your final report or as a separate tech memo/formal email to those making the decisions.