Is running over a pedestrian the perfect way to get away with murder? 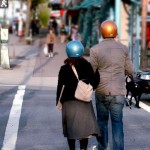 In New York City, 52% of all traffic fatalities are pedestrians.  That percent drops to 14% for the rest of the United States.  Obviously there’s an exposure risk in New York.  There are more people walking around there than anywhere else.

Conversely, Minneapolis has a very low pedestrian fatality rate because we have an above ground skyway system.  The intent of the skyway system is to keep people moving between buildings during our harsh winters, but the obvious tangential benefit is that pedestrians don’t get killed by cars because they don’t cross paths with them.

Here are some other interesting facts from the podcast:

I read about the obvious solution a couple of years ago in AJ Jacobs’ very funny book Drop Dead Healthy: One Man’s Humble Quest for Bodily Perfection.  Here’s a description of the chapter on Skull Safety from AJ’s website:

“If you want to live a long life, you’ve got to keep safety in mind. Jacobs wore a pedestrian helmet around the city for a week after he learns that more people die from drunk walking than drunk driving on a per mile basis and that pedestrian accidents in general kill more than 25,000 people a year.”

I wonder if the Minnesota Toward Zero Deaths campaign will want to mandate helmet use as their final strategy to stop the last vehicle fatality?