Is the Client Always Right? 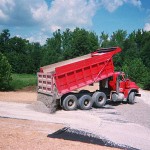 A gravel mining operation is expanding in our region and they could have up to 18 trucks entering and then exiting their facility per hour.  The trucks all turn at a local road/state highway tee intersection (each are two lane roads, no turn lanes, side street is stop sign controlled).  We were hired to determine if the state highway intersection needed upgraded traffic control or turn lanes.

The plant manager was surprised.  He was expecting to need turn lanes at this sleepy intersection (a few thousand vehicles a day on the state highway and almost no vehicles on the cross street).  I tried to explain that adding turn lanes would cost $50 to $100k at the intersection and that it might actually make things slightly less safe (larger intersection for the trucks to turn onto would mean they need larger gaps).

So he had a meeting with DOT staff that I couldn’t make and he came back to me – what about summer conditions where the traffic on the state highway could be heavier due to resort traffic.  The DOT had summer counts, so I factored up the through volumes 75% to match up with the summer volumes and ran the scenario with the doubled truck traffic.

DOT staff jumped on this Level of Service E and are recommending a bypass lane and right turn lane be added to the intersection.  I get their position.  It’s hard to know which configuration is safer since we’re really playing at the margin.  Adding the turn lanes could be seen as a free upgrade to the highway system since the plant should cover that cost.

My first boss, Shelly Johnson, told me several times that we are consultants making recommendations.  We’re not responsible for implementing the solutions and you need to develop a certain detachment from your work if you’re going to survive as a consultant.

I believe I made the correct recommendation in this situation, but my client wanting turn lanes isn’t a terrible idea.  It’s his money and I need to let this one go…