Median Acceleration Lanes (MALs) are just what they sound like – an acceleration lane on the inside median. MALs are intended to allow left turning vehicles from the side streets, or U-turning vehicles on the mainline, to complete their turn without needing to wait for a gap in the highway through traffic. In Minnesota at least, MALs are more commonly used for heavy truck traffic, which can use the lanes to accelerate up to speed before merging. Theoretically, safety at the intersection is improved by reducing potential conflicts.

Working with the Minnesota Department of Transportation (MnDOT), we recently monitored 12 MALs in Minnesota to test this theory. Key questions we collectively sought to answer included: if and when MALs were used, whether differences in usage were noticeable between cars and trucks, if the amount of traffic (during peaks, on the mainline, or on the side street) influenced their use, and if crash records exhibited an improvement in safety.

How did we do it? To capture MAL use, cameras recorded operations for one week at the intersection and the end of the MAL at each location. Observing operations over this week, the total number of vehicles turning left or performing a U-turn were counted and separated into three bins; did not use the MAL, partial use of the MAL (merging before the end of the lane), and full use of the lane (merging at the ending taper of the MAL). Passenger vehicles were also separated from heavy trucks during these counts.

Mainline daily volumes were obtained from MnDOT while tube counts were conducted on the side streets at each location, also for one week. This information provided daily and peak hour volumes to compare utilization rates of the MAL against. Crash records for the 12 sites were reviewed along with additional data for 32 similar sites without an MAL. 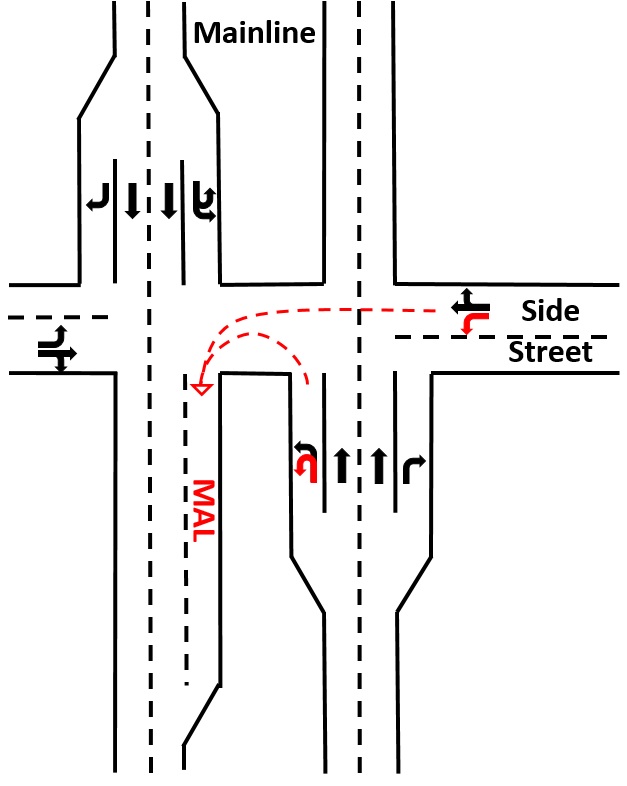 As you might imagine, this was a data-intensive project providing us lots of numbers to examine and evaluate. Summarizing the data collected, key results of the study are:

Taken together, we were encouraged by the overall use of the MAL and the decrease in fatal/severe injury crashes compared to intersections without the MAL. The increase in overall total crashes could be related to other factors that are still being investigated. Given the relatively high use and the decrease in fatal/severe crashes, an MAL could have potential as a safety device.

We’re sure there’s also lots of detailed statistical work that could be completed to further advance our understanding of the MAL benefits. For instance, do operational delays really decrease with an MAL? We encourage MnDOT to keep going on MAL evaluation, expanding the review into areas like vehicle delays and even putting an economical cost-benefit number on a generic MAL.

Want to see more? Click the link to review the official study documentation.