Parklets – Functional Beauty in the Street 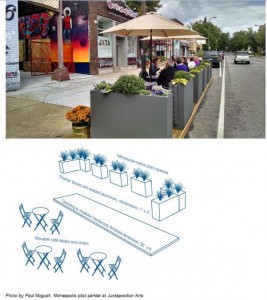 With summer coming to end, we are also reaching the end of year 2 for Minneapolis’ experiment with Parklets. Parklets, for those who aren’t familiar with it, is the term for the conversion of one or more parking spots into a public space. Considered streetscape, a parklet provides a space for bike parking, sitting, plantings, public art, and/or other types of public amenities. Originally started on the west coast, parklets have become a permanent feature in warmer weather cities and a summer improvement for northern cities.

Minneapolis started a test program in 2014 for parklets and has five locations this year:

Hosted by adjacent businesses, these extensions of the sidewalk have the goal of improving livability and walkability in Minneapolis. As stated in the City’s Parklet Application Manual, the program’s benefits are:

I like this idea and the ones I have seen definitely spruce up the otherwise curb-to-curb pavement. It seems like the Minneapolis project is going well and I hope to see it expand to more places and neighbors like Saint Paul. But if you want to see them firsthand, better hurry – the parklets get packed away for the winter at the end of October.

Now If I could find a place to park…

Photo Courtesy of the City of Minneapolis