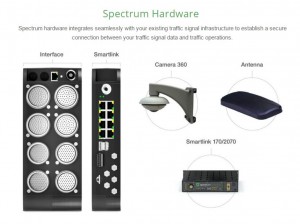 To be honest, I didn’t get the Spectrum system when Roman from Miovision showed it to me at the ITE Western District meeting last summer.  Not only didn’t I get it, but I thought the approximately $5,000 price tag was shocking for what I thought of as an internet router (it uses 4g/LTE communications).

I received an email from Josh Richardson at the City of Gillette, Wyoming asking if I knew of criteria for when to bring fiber communications to existing signal systems.  They operate 14 signals, none of which are interconnected.

The lightbulb went off.  My hunch is that running fiber to the intersection would cost more than $10,000 per signal as a retrofit project.  Plus it would be time consuming and introduce significant infrastructure that would need to be maintained in the future.

The +/- $5,000 Spectrum system would be plug and play (less than half an hour to plug in according Miovision’s website).  It works with all controller types and gives you communication along with easy to implement phone notifications.

Even though Miovision is a slight competitor with my CountingCars.com business in the data collection space, I respect what Kurtis McBride has done and I think he is a visionary. I expect Spectrum is just the first step in Miovision rolling out a 21st Century traffic signal controller system (that will likely include complete adaptive signal control).

Our current controllers would look at home in the 1960 NASA Control Center.  It’s only a matter of time before a company rolls out a computer box that eliminates the need for the giant rack/card system we currently use to run traffic signals.

p.s.  I love getting emails like the one from Josh.  Please feel free to shoot me an email at mspack@spackconsulting.com if you want my thoughts on a challenge you’re currently wrestling with.