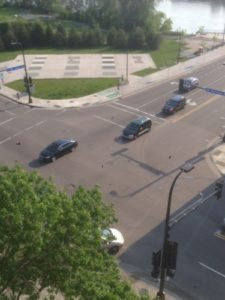 As part of the Transportation Bill signed into law last week in Minnesota, the text contained language regarding “Traffic Signal Timing Optimization.” Effective as of May 23, 2015, the road authority must complete an inventory of traffic signals (submitted on or before December 30, 2015) and, based upon that inventory, develop and implement a traffic signal system optimization plan.

As detailed by the Institute of Transportation Engineers, “there are about 300,000 traffic signals in the United States alone and over 75% of them could be improved by updating equipment or adjusting the timing.” Retiming to improve traffic signal efficiencies provides multiple benefits including:

If government agencies are not examining traffic signal timing at least every three years, they definitely should be.

Despite these benefits, I still have two issues with this new law. First, the law only applies to principal arterial roadways or roads with an average daily traffic (ADT) greater than 20,000 vehicles per day. Using those restrictions, I examined how many signals would fall under the new law for the City of Saint Louis Park, where our office is located:

That leaves part of one road with at most three signal systems (two could be under MnDOT jurisdiction since they are related to the Interstate system). So not a huge impact in terms of local operations.

My second issue is that no money has been attached to the law. Whether it’s one or three traffic signals, the City of Saint Louis Park will now have to complete an inventory and timing plan as part of their current budget. Having not talked with the City Engineer, I’m not sure if this was anticipated or not. But either way, it’s an additional expense on already tight budgets.

Bottom-line: I like the idea of the law, but it would have been nice to lower the threshold while also provide some funding for it.