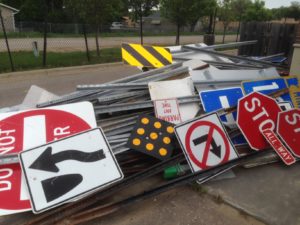 Mark Ray, the public works director/city engineer for the city of Crystal, MN, told me about this fantastic program he developed.  Officially the city council approved the “Traffic Sign Liability Reduction Program,” but the public works guys call it “Operation Sign Harvest.”

Mark himself goes out and takes signs down that are unnecessary and throws them in his truck.  Following behind him is another truck that removes the sign posts.  No multi-step work order process involved.  It happens so fast the neighbors don’t even see it.  He’s only received two requests about the hundreds of signs he’s already taken down, both months after the signs were removed.

I love this approach.  The majority of signs in every city I’ve observed should be removed (could be as high as 90% in some cities).  Traffic signs are ugly, most of them have no impact (i.e. Dead End signs on 100 foot long cul-de-sacs), and they cost taxpayer dollar’s to install and then maintain.

I recommend every city engineer/city traffic engineer adopt the quick hitting “Operation Sign Harvest” approach (after getting authorization from your council on a Traffic Sign Liability Reduction Program).

Thanks for sharing Mark.