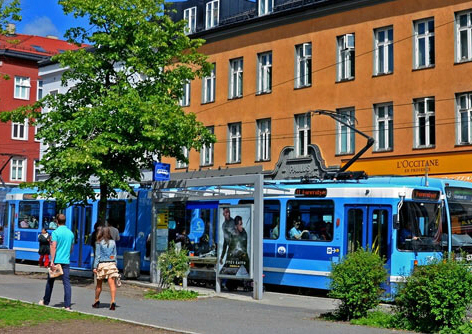 Here’s a Reuters news story saying the recently elected city council in Oslo, Norway is pledging to add 60 kilometers of bike lanes and then banning private automobiles in the city center by 2019. This initiative is part of Norway’s initiative to reduce carbon emissions and cut car traffic by a third in the next 15 years.

Some cities have automobile holidays – Minneapolis, Minnesota has Open Streets events. This however, is the first major city I know of that’s contemplating a complete automobile ban. While this initiative will likely have a positive effect on the carbon emissions, the opposition has expressed concern that the change will hurt sales at businesses in the central district. I imagine traffic engineers in Oslo are also quite nervous.

Minneapolis Minnesota had a smaller scale project restricting traffic in the city. Hennepin Avenue and First Avenue in Minneapolis were converted from a one way pair to two way streets about five years ago in an effort to make the area more bicycle and pedestrian friendly and improve access to businesses.  There was great concern at the time among traffic engineers and business owners about the project too, but the conversion has been a success. The conversion didn’t add any noticeable delay to the the transportation system.

Banning automobiles in the City Center may negatively impact congestion in the outer areas of downtown, but I don’t think it would have significant safety implications (it may actually improve overall safety).  I imagine the automobile ban in the city center can be done in a way that’s reversible if it’s a failure. I’m all for Oslo banning automobiles – this is a great experiment for us to watch!  (I’d be less excited about the ban if I lived on the outskirts of Oslo or was a business owner in the city center.)