Andres Baez forward me this article about Carnegie Mellon’s experiment with balancing on-street parking supply/demand on campus.  Professors Mark Fichman and Stephen Spear saw that the majority of spaces around campus were empty after multi-space pay kiosks were installed.  Before that the old coin metered spaces were often almost fully occupied.

They saw a natural economics experiment right out their front door and they were able to turn it into a course project.  The per hour pricing with the coin meters was too cheap (which induced demand) and the kiosks were too expensive (which suppressed demand).  Based on the payment data from the kiosks (which they field verified as reasonably accurate), they were able to chart demand based on time of day/week. 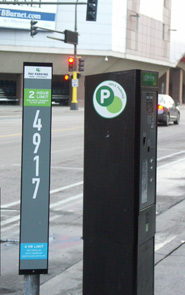 Then they worked with the campus transportation folks to implement variable pricing based on the historical data.  They also posted “economy parking” and “premium parking” signs on different blocks based on the demand curves.  With the variable pricing they’re able to achieve they’re target occupancy rate.  (The target at Carnegie Mellon is about 80% occupancy so the late student/professor can always get a metered spot.)

This isn’t exactly new.  Variable parking was implemented in San Francisco with the SFPark project.  The huge difference is that Carnegie Mellon is making adjustments based on historical data to induce about an 80% occupancy rate.  SFPark is also balancing supply/demand through variable pricing, but they’re doing it based on real time occupancy data.  Carnegie Mellon’s approach is not optimized in real time, but it also doesn’t need expensive sensors at each parking spot (and sensors break).

With Carnegie Mellon’s approach, data could be reviewed at regular intervals (monthly?) and tweaks then made to the hourly parking rates to induce the target parking occupancy.  It’s an iterative process.

Professor’s Fichman and Spear are hoping to roll out the strategy across the whole city of Pittsburgh, not just on their campus. It would be great to do the experiment on a larger scale.  Then a procedure could be developed so parking departments could simply crunch their data and update their pricing.

Revenue isn’t being optimized as well as a system that utilizes real time data, but this approach doesn’t have the expense of an occupancy sensor at every parking stall.  I’m curious to see how these two items balance out.

Any city that has the multi-spot on-street parking kiosks, like Minneapolis, should be interested in this approach if they don’t use variable parking rates.  Having metered spaces about 75-90% occupied is in the best interest of everyone.