For many traffic studies, testing different improvement alternatives is a key element of the study. Things like turn lanes, different traffic control, adding/removing access, and many other options should be considered to improve traffic flow. With Vistro, we actually have two methods to test options – through Scenario selection and through a Mitigation tab.

We’ve previously written about managing scenarios within Vistro, which you can read about here. We generally start with a Base Scenario to set the initial characteristics, then set-up our Existing, No Build, and Build scenarios. To add another Base Scenario, create a copy of the Build scenario (or whichever scenario needs mitigation). Then simply change any or all characteristics of one or more intersections to test improvements. This screen shot shows the selection of multiple scenarios, including mitigation ones that we developed for a project. 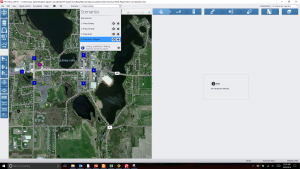 The benefits of using Scenarios include the ability to:

The second method is contained within each scenario. Select an intersection and select the ‘Mitigation’ icon at the top right. Once this is opened, the basic intersection setup and associated traffic control parameters are shown in the Unmitigated condition. Multiple mitigation options can then be developed to test potential solutions. The results of the Unmitigated condition remain at the top of the screen for comparison. This screen shot shows this method, with tabs at the top showing multiple options that were examined. 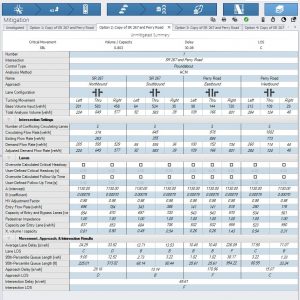 The benefits of using the Mitigation tab include the ability to:

Each method is useful with benefits as described above. Our preference is generally to create a new scenario covering all study intersections. We generally like this method because of the report and graphics that accompany it. However, we recently used the Mitigation tab for a project that is specifically testing traffic control options at three study intersections. This was more useful for the quick testing and results rather than the in-depth review of all characteristics.

Both methods are simple to use and simple to adjust. We’ve had success with each and know these options are time-savers for our projects.

Are you thinking about purchasing Vistro for your office? Receive a $250 discount off of Vistro when you use or mention the Promo Code “SPACK16″ when ordering from PTV North America.