The study was completed by Kimley-Horn and Associates in conjunction with the Minnesota Department of Transportation (MnDOT). The Trunk Highway 65 corridor on the north side of the greater Minneapolis-St. Paul metro is heavily congested during the AM and PM peak hours. Traffic is very one sided during these peaks with most trips heading south towards the downtowns in the AM peak and then heading north in the PM peak.

The intersection of focus in this case was Truck Highway 65 and Viking Boulevard in East Bethel, Minnesota. Traffic operations at the side-street stop intersection are unacceptable in the existing condition during the peaks and traffic is projected to grow by 20% by 2040. Ideally, an interchange would be constructed to improve operations. Unfortunately, funding limits of $5 million to cover this and several other intersections ruled that concept out. Instead, two options were considered:

With ample right of way, approximately 80% of the traffic on the mainline, and relatively low through movements on the side street, this intersection was deemed a viable candidate for a Reduced Conflict Intersection (RCI), also known as a J-turn intersection or Restricted Crossing U-Turn intersection (RCUT).

A RCI is an intersection where the major street maintains all movements but the side street is forced to turn right and use a U-turn to ultimately complete left or through turning movements. This design also reduces the number of conflict points from 32 at a conventional four leg intersection to 9 conflict points at an RCI, thus helping with safety concerns. RCIs are not new to the state of Minnesota but currently there are only side street stop controlled RCIs. This project would be the first signalized RCI in the state. This lead to unique challenges since there are no state templates to base the design on. 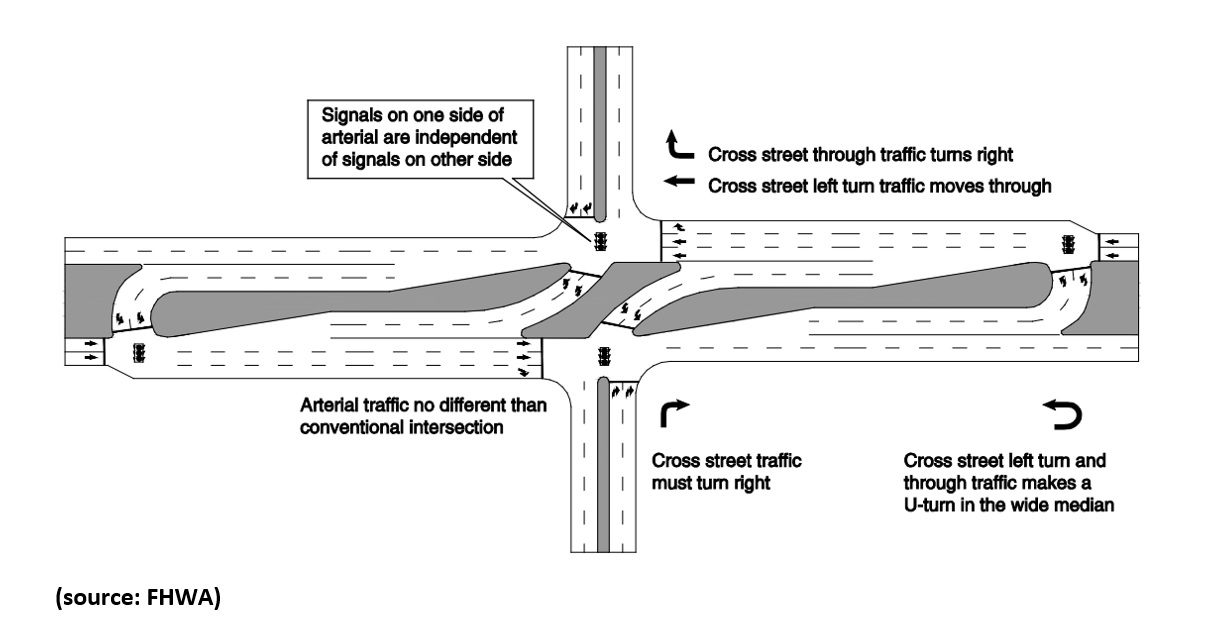 Best practices research was vital to the design of this project. This included conference calls with the Texas Department of Transportation and the North Carolina Department of Transportation. Both DOTS are leaders in the design of signalized RCIs. Some of the main concerns were signal operations, pedestrian/bicycle crossing, signage, and intersection spacing. This research and knowledge of lessons learned helped shape the design for Minnesota first RCI.

As previously stated, traffic operations at Trunk Highway 65 and Viking Boulevard are unacceptable in the existing condition. These conditions will only be exacerbated in 2040 in traffic projections hold true. Traffic operations were compared between the existing geometry, conventional geometric improvements, and a RCI. In the 2040 condition all analysis scenarios suffer from severe delays however the RCI design is predicated to have 60% less delay per vehicle than the existing geometry scenario and 40% less delay per vehicle than the conventional geometric improvements scenario.

While this project has its financial limitations, it provides the best benefit to cost ratio of all options analyzed. Coupled with better traffic operations and a safer geometric design, this signalized RCI will hopefully continue the trend of looking at alternative intersection designs here in the state of Minnesota.