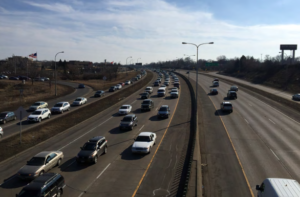 MnDOT is widening Highway 100 and replacing several bridges in St. Louis Park near my house and our office.  They closed the Minnetonka Boulevard interchange and have removed the whole bridge.  This will allow them to complete the interchange reconstruction in about six months vs. taking a year or more if they were to rebuild it under traffic.

We’ve had a few days of traffic chaos in the neighborhood and the city officials are upset MnDOT isn’t doing more.  You can read about it HERE.  They want traffic signals built on the collectors and there’s also talk of stop signs in the neighborhood.

Since I walk 3/4 mile back and forth to work right through the neighborhood and along the collector Wooddale Avenue, I’ve been able to see this traffic experiment first hand.

This past Monday was truly crazy.  I’ve seen simulations where our models show gridlock, but I’ve never seen gridlock like this in reality.  I’ve since found out that MnDOT didn’t sign a detour, which left people trying to find their way.  This explains why I saw so many people staring at their phones while driving in our neighborhood.

BUT, things have actually calmed down since then and my semi-educated observations are that traffic is back to normal and may even be down a little bit from conditions several months ago.

I think the congestion was so bad in our area that commuters decided to avoid it, leaving just the locals.  I would like to see current data, but I don’t think any signals or stop signs should be put in right now as a knee jerk reaction.

There is a broader lesson to be learned from this situation – MnDOT could have proactively put up traffic control to make the neighborhood system work better for commuter traffic after the bridge closure, but it would have induced commuters to continue to use our neighborhood streets.  Letting congestion be so bad for a few days resulted in the commuters deciding to avoid our neighborhood.

As a resident, I’m happy we don’t have heavy traffic volumes moving efficiently through our neighborhood.  It was worth a few days of pain to be able to have lower traffic levels now for the next six months.