Story of a Road Diet Success

Jason Carder, P.E. from Mattern & Craig was kind enough to reach out to me about a great success story after he read our post on Two Way Left Turn Lanes.  Jason worked on converting the main arterial through downtown Kingsport, Tennessee from a four lane to a three lane corridor with bike lanes.  Travel times through the corridor were not noticeably impacted and the conversion significantly reduced the number of crashes as well as the severity of those crashes.  This is a great example you can use when considering a “road diet” on a corridor carrying up to 20,000 vehicles per day. 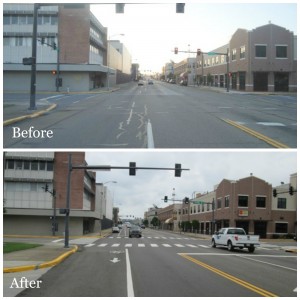 Center Street (also State Route 36) is a primary arterial through Kingsport, Tennessee and serves as the main thoroughfare in the downtown area.  It was widened several decades ago to a four-lane undivided section, with no left turn lanes at any of the intersections.  In 2013, the Tennessee Department of Transportation (“TDOT”) informed the City of Kingsport that Center Street was scheduled to be resurfaced.  The City began to investigate the possibility of a “road diet” for the section of Center Street in the downtown area and then to the east.

The City hired two consultants to evaluate the feasibility of converting Center Street to a three-lane section (one lane each direction with a TWLTL), using simulation models.  Mattern & Craig (a local firm with an office downtown) was hired to investigate the eastern section, and RPM Transportation Consultants (from Nashville) was hired to investigate the downtown section.  Both consultants reached the same conclusion: that a road diet was feasible.  The City decided to proceed, and each consultant prepared design plans that were used by TDOT to alter the pavement markings accordingly.

The resurfacing was performed during the summer of 2014.  The City hired Mattern & Craig to perform a before/after study to evaluate the safety and operational affect the road diet had.  They determined that there was no significant increase in travel times (in fact, travel times actually decreased in some directions/peak hours), but there was a significant improvement in safety (speeds normalized, crashes reduced).

The City and TDOT (and consultants) consider the project a big success, and a good case study for future road diets.  It was somewhat controversial with the public, however.  In the future, the City will make more of an effort to educate the public and advertise the project in advance (although there was a public outreach effort, some people still seemed surprised by the project).  In addition, more data prior to the conversion (travel time studies, volume/speed data, etc.) would have been beneficial, to quantify the benefits. 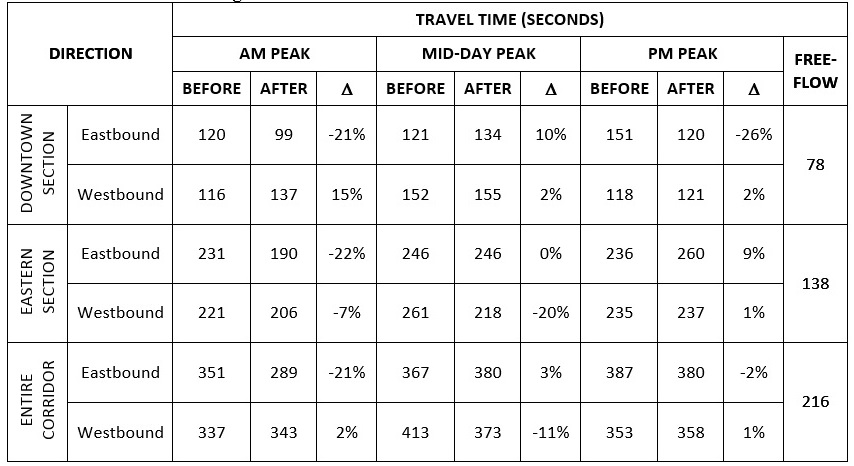 P.S. We love sharing project examples.  Please email me if you have an interesting case study you’d like to share with our community.