5 Secrets to Accurately Counting a Roundabout

At Traffic Data Inc. we recently completed intersection turning movement counts in Cottage Grove, Minnesota including a couple of roundabouts. We’ve counted many roundabouts before however, one of those roundabouts is a large, multi-lane, six-leg roundabout which created some unique counting challenges.

With each vehicle having six potential movements plus multiple approach and circulating lanes, plus bicycles and pedestrians movements, there’s a lot to keep track of. In addition, there are trees and an artistic spiraled retaining wall that made it made it difficult to see to the other side of the roundabout (A side note – Bryant Ficek at our office helped with the planning and design of this roundabout. The spiral wall not only looks great, it does exactly what it’s supposed to do which is to keep traffic moving in the right direction).

How do you accurately count an intersection of this size? It turns out all you need is a COUNTcam, good birds eye view of the intersection, and a lot of patience.

As is standard at Traffic Data Inc., we use COUNTcams at each of the study intersections to record video in the field, then we complete the turning movement counts in the office using COUNTpro. Two of the six legs on the six-leg roundabout are entrance and exit ramps for an interchange, with the roundabout’s main road passing under the nearby highway. As we were looking for a place to setup the COUNTcam video cameras, we noticed a sign along the highway near the overpass and found it was a great spot to get a good top-down view of the six-leg roundabout. Being able to capture all six legs clearly in one camera was a lucky find and would prove invaluable as we counted the roundabout. 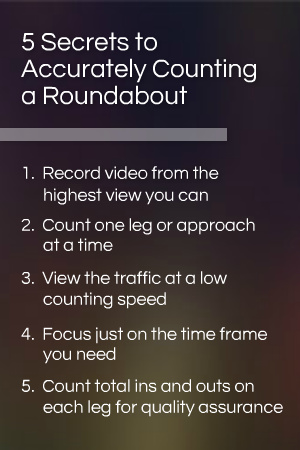 Roundabout turning movement counts are never easy and this one proved to be trickier than most. However, that view of the six-leg roundabout made our counts in the office slightly less painful. To complete the roundabout counts, the person doing the counting had to focus on entering traffic from one leg at a time to accurately follow vehicles through the intersection to their exiting leg. Once the count was completed for one approach, it was repeated for the others. Fortunately, two of the six legs have one-way traffic, which reduced the counting load.

To ensure accuracy in our counting, we narrowed the time frame of the counting to just the a.m. and p.m. periods to make it more manageable and reduced the viewing speeds to 2x or 3x speeds to improve accuracy. During the roundabout’s heaviest use, we viewed the video at real-time speed. The benefit of the video for us was being able to collect the data and watch (and rewatch) the traffic flow as many times as we felt necessary to get an accurate count. This just wouldn’t be possible with personnel in the field.

One final, shameless plug. If you need to complete further roundabout capacity analysis after collecting the traffic data, take a closer look at our Roundabout Capacity Analysis spreadsheet.  This easy-to-use spreadsheet faithfully implements the processes of the Highway Capacity Manual on Roundabout. Now you too can complete capacity analysis in as little as 5 minutes.

Use the MS Excel based spreadsheet to help you assess the operational performance of an existing or planned one-lane or two-lane roundabout given traffic demand levels. This customizable spreadsheet allows you to adjust standard defaults, such as the lane utilization, critical headway or follow-up headway, according to local factors.