For a city traffic engineer, nothing signifies the end of summer quite like the barrage of calls from concerned parents (and sometimes school officials) requesting school speed zones and safety improvements. With so much at stake and so many factors to consider, school speed zones can easily become one of the more difficult projects that a traffic engineer encounters. We’ve been involved with several of these projects lately, and have identified some best practices that may be helpful to anyone else taking on these incredibly important projects.

Why do we need school speed zones?

We can all agree that the safety of our children is a top priority. Whenever we have a situation where there are high volumes of children, the stakes get higher, as do the risks. With the hustle and bustle of the school environment – rushing to beat the bell, catching up with friends, balancing school books in one arm and sports equipment in the other – kids are distracted (not to mention cell phones!). When kids become distracted, the likelihood increases that they may make a misstep that puts them at risk of accident or injury. According to the Minnesota Department of Transportation (MnDOT), the top reasons for auto-related events involving children include:

MnDOT reports that crashes including pedestrians are eight times more likely to result in death than those not involving pedestrians. That likelihood is greatly impacted by the speed at which the car is traveling, as you can see from the figures below. Someone under the age of 30 years old only has a 3% chance of being killed by a vehicle traveling 20 mph, whereas it increases to 13% at 30 mph. The risk increases rapidly from, reaching about 52% when the vehicle speed is 45 mph. Slower vehicle speeds mean a pedestrian has a greater chance of survival if hit, which is an amazing benefit from a potential school speed zone. 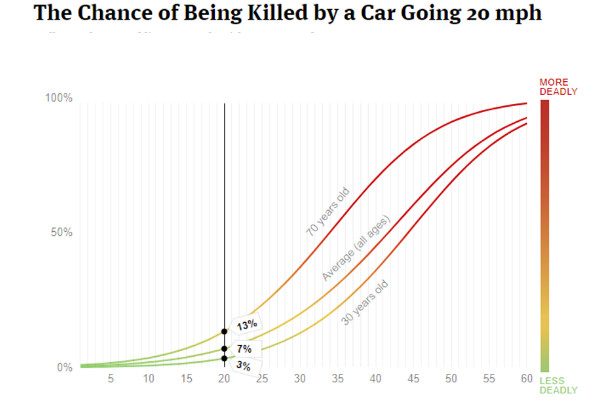 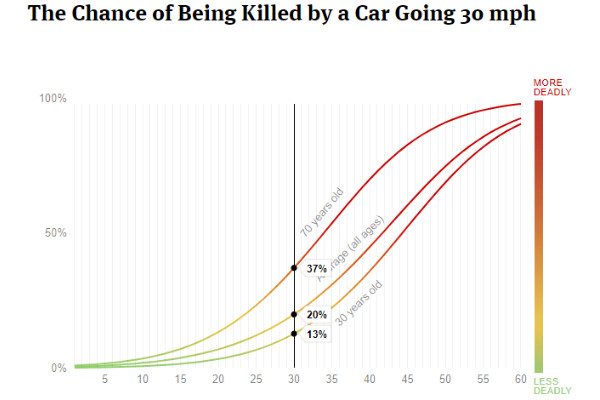 When do we implement them?

1. Identify a school route plan.  Our first thought when reviewing a school route plan should be How can we minimize conflict? We can do this by reducing the number of streets children need to cross to reach the school and ensure that the crossings have optimized visibility (e., removing shrubs and other obstacles that may affect visibility).

3. Education.  Educating children via police liaisons, public works programs or education programs coordinated with the schools directly, will help to make sure they understand how to keep themselves safe while traveling near roadways.

Other Measures
Speed limit signs by themselves tend to be relatively ineffective. During our analysis, if we find that the 85th percentile speed is more than the speed limit, we like to recommend the use of flashing signage indicating school speed zones during the active school hours. Other measures include speed humps/raised pedestrian crossings, intersection or mid-block bump-outs, or using crossing guards to assist with safe crossings.

The unfortunate reality is there are an infinite number of ways that tragedy can strike when you combine vehicle traffic, particularly high-speed traffic, and high-volumes of young pedestrians. That’s why it’s incredibly important to control the speed and, whenever possible, the volume of traffic in school zones. By slowing drivers down and encouraging them to be aware of their surroundings, we give them more time to react to and avert a potentially dangerous situation.