I incorporated Traffic Data Inc in February 2001 – 15 years ago! It was the beginning of Spack Enterprise.

At the time I was the staff traffic engineer for Maple Grove.  I asked the city engineer for permission – I couldn’t afford to lose my job over a little night/weekend company.  After consulting with the city administrator and attorney, he told me I could do traffic counting anywhere I wanted and I could even do consulting work as long as I didn’t do a study in Maple Grove – thanks Ken!

I bought four tube counters and one count board from JAMAR.  That $5,000 was a big investment for us considering we bought our house the year before for $90,000. And like many other company origin stories, Spack Enterprise started in my garage.

I was lucky enough to have a lot of friends who were potential clients from my involvement in the North Central section of ITE.  I bought a couple more count boards the next year and was able to line up temporary staff (friends, family, and temp agency) to help me out.

I was able to sprinkle in a couple of traffic studies and a part time gig with a family friend.  I left Maple Grove in 2002 to be off on my own.  It was a huge leap that allowed me to start my second company, a consulting firm – Spack Consulting.

A real turning point for “Spack Enterprise” was finally building the portable video-based counting system called COUNTcam, I had been dreaming about this since I was an intern at Image Sensing Systems in 1995.  The cameras allowed us to be more efficient collecting TMCs at Traffic Data Inc. I decided to roll out a store at CountingCars.com with the camera systems instead of opening branch offices of Traffic Data Inc.  Instrumental to our early sales was MikeOnTraffic – I’m so glad I jumped on the blogging bandwagon in 2007 and I’m very grateful for the community we’ve built.

CountingCars has come a long way since we built those initial camera systems (Even though our products have always been perfectly functional, I’m almost embarrassed with how unpolished our initial products were).

The decision to start my first three companies, ultimately moved me in the direction of sharing my knowledge with others. I started writing traffic engineering manuals with Bryant Ficek and opened an online store called Spack Academy  with training materials for transportation professionals. Much of my success has come from having the support and motivation from others in the industry. I wanted to return the favor to the traffic engineering community, and started TripGeneration.org where I’m freely sharing the trip generation data we are collecting with anyone who would like a copy.

Spack Enterprise, which started with just one company, is now a collection of five.

Things were quite bumpy in those early years working by myself with a few part time helpers.  I worked too cheap and a few really late payments almost put us under several different times.  Luckily, my wife Jane was very supportive and we’ve always managed to live below our means.

I’m proud of the traffic counting and traffic engineering consulting businesses we’ve built.  It amazes me when I see one of our projects every time I get in my car and drive around Minnesota. A couple of thousand projects in the same state will do that. 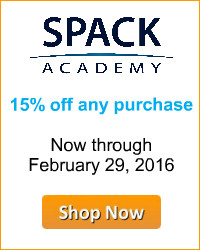 To celebrate Spack Enterprise’s 15th anniversary, I am offering 15% off any Spack Academy purchase (except for the The Engineer’s Guide to Citizen Traffic Requests which is already on sale!) now through February 29th. Use CELEBRATE15 at checkout.

If you haven’t already visited Spack Academy, check it out! There are some great instructional traffic engineer tools that are sure to help you in your day-to-day work.