To Raise or Not To Raise: A Speed Limit Case Study 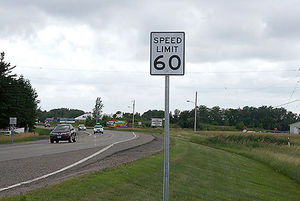 Let’s say that the Minnesota legislature wants to raise the speed on two lane highways in the great State of Minnesota from 55 mph to 60 mph.  Is that a good idea or a bad idea?  That is what we at Traffic Data Inc. along with Stonebrooke Engineering are helping MnDOT to determine as part of the “Evaluation of Certain Trunk Highway Speed Limits” project, also known as the “Spot Speed Study.”

Changing the speed limit of a road isn’t as easy as just putting up a new speed limit sign. Technically it could be, but that isn’t recommended. Things such as the current speed limit, the amount of traffic, how fast folks are driving now, vertical grades, horizontal clear zones, the number of accesses and much more need to be factored into the decision to change a speed limit.

For this past year and the next few years we’ve been sending people out to document the current conditions on Minnesota’s 7,000 miles of two-lane, two-way roads to see if they would be good candidates to raise the speed limit to 60 mph. The best way to do this is have people take accurate, detailed notes, measurements and photographs every foot for the 7,000 miles. A real comprehensive study. Alas, it turns out that this method is “cost prohibitive.”  We took a different approach to evaluate the roads and make a recommendation. Here’s how we are evaluating the speed limit of Minnesota’s roads.

The 7,000 miles of road to be studied is broken up into hundreds of small sections, each one averaging a few miles long. Using MnDOT’s (awesome) video log system, which is a compilation of photographs every few feet on every MnDOT road, essentially a flip-book of driving down the road, we are able to make notes on each road section in the office. Things such as:

a roadside assessment of the clear zones can all be done while in the office.  Being able to assess the roads from the office greatly reduces time needed in the field, as well as the possibility of missing something.

Once the office prep has been completed, a field technician to travel to the sections of road to be evaluated. Using the notes made in the office, the field technician will measure the slopes of steep grades, take photographs of anything of interest and confirm that our office notes are accurate.  They will also take lane width, shoulder width and inslope measurements at one spot along each section, known as the “typical section,” that is representative of the corridor.

At this typical section, the technician will also gather speed data of vehicles on the road.  Depending on the average daily traffic (ADT) of the road, they will either set up a tube counter to collect a day of speed data (for ADT under 1,000) or collect a radar sampling of vehicles (for ADT over 1,000 – sample size of 100 vehicles).

All of this data is then compiled into a report for each section that, based on certain requirements, states whether or not that road section is a good candidate for a speed limit increase.

Based on the locations we have studied so far, it is clear there is a large mix of roads that should have a speed limit of 60 mph and roads that very much should not. With use of the data from the study, MnDOT can make sound decisions for the safe improvement of travel times throughout Minnesota.

Once this is study is finished, maybe our next travel time savings study will be on the removal of the “green phases” at signals.