We just sent out a traffic study for a proposed gravel mine on Highway 169.  The Highway is busy enough that a single car trying to turn left onto it from the side street is at Level of Service F (more than 60 seconds of average delay).  The handful of gravel trucks that will be added to this left turn movement during rush hour certainly won’t warrant a traffic signal, but they will experience significant delay.

LOS F at a side street stop sign approach on a highway is nothing new.  It’s actually very common.  As a profession we’ve decided this is generally ok as long as the queues at the stop sign are reasonable and there are appropriate gaps for vehicles to safely turn onto the highway.

Gravel trucks and other heavy vehicles complicate this situation because they need larger gaps to make the turn and they accelerate so much slower than passenger vehicles.  This  poses a sticky issue because there still aren’t enough vehicles to justify a traffic signal based on the Manual on Uniform Traffic Control Devices and adding turn lanes doesn’t noticeably improve the side street dealy. 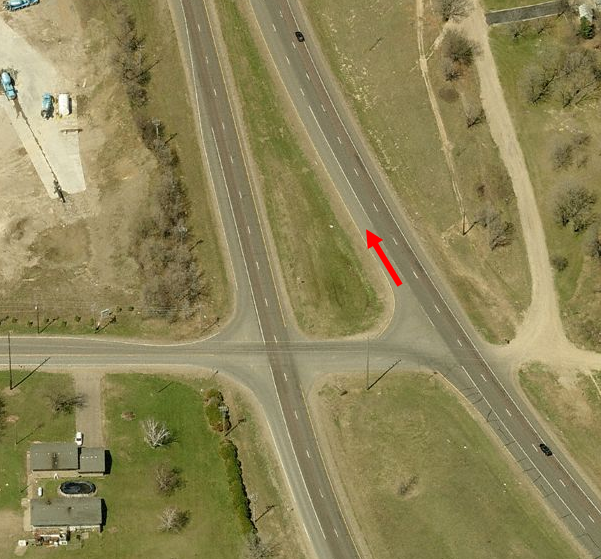 Given our forecasts related to the gravel truck traffic, we believe something needs to be done to improve the safety at they key access point on Highway 169.  But how should we model a left hand acceleration lane?

The Highway Capacity Manual analysis procedures have inputs for the approach lanes at an intersection, but not the departure lanes.  We talked about building a SimTraffic or Vissim model, but we’re not sure how accurate that would be (how to calibrate?).  Then we struck on the idea – how about we remove the northbound through volumes from our Level of Service analysis.

Since the the eastbound to northbound left turning gravel trucks will have an acceleration lane (that shouldn’t be used by the northbound through traffic because it will be across from a left turn lane), this method would account for the driver’s only needing to make a gap decision for the first step of the crossing.

The LOS for the gravel truck left turning movement improved from F to C when we made the adjustment.  This result combined with the safety performance of the existing acceleration lanes at the concrete plant gave us confidence to recommend the left hand acceleration lane.  Now we need to see if it gets approved and built.