The Biggest Engineering Mistake of My Career 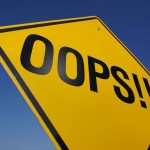 All of the streets in my study were city streets – no county or state roads involved.  All of the development’s traffic would be coming into and going out of the neighborhood through the major collector/minor collector intersection.

Although it’s not written down, the consensus among traffic engineers in Minnesota is that Level of Service D or better is considered acceptable and no mitigation is necessary until you get to Level of Service E.  All’s good.  My recommendation was to make sure sight distance is maintained for the 30 mph speed limit and that a couple of stop signs be installed.

I write up my report and submit it to my client Geoff, the developer’s civil engineer who’s designing the site and internal roads.  He sends it in to the city right before the submittal deadline so they can meet the developer’s schedule of getting the necessary city approvals and permits.

Geoff calls me a week later at about 4 pm on Friday and he’s mad.  He got the city review back on all of the documents and their staff civil engineer says their standard is that Level of Service C needs to be maintained and that a signal should be built at the major collector/minor collector intersection – paid for by this development.  The city report cited two paragraphs buried deep in the city’s ordinance.

What?!?!  It would have been nice of the city traffic engineer mentioned this to me when we were working out the scope of what needed to be included in the traffic study.

I spent the weekend changing the report and running through more analyses.  The need for the signal was largely based on the growth in background traffic over the twenty years and the fourth leg of the intersection being built, not this particular development’s traffic.

I submitted the revised report on Monday detailing all of this with the conclusion that it isn’t prudent to build the traffic signal with this development because the intersection won’t meet warrants per the Manual on Uniform Traffic Control Devices.  I recommended the intersection be monitored for the needed traffic signal improvement.

The developer talked to some of the city council members and he agreed to pay for part of the signal (his fair share) as part of the development.  Then the city would monitor the intersection and build the signal when the traffic got heavy enough to warrant the signal.

This was a painful lesson for me to learn.  Now I always ask the reviewing agency staff I’m working with what the city/county/state written standards are related to traffic impact studies.  I don’t assume they’ll proactively tell me everything.