The End of Traffic and the Future of Transport – Book Review 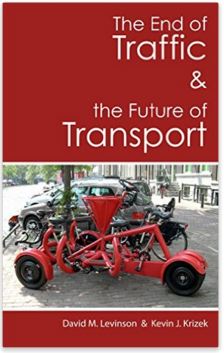 I recently read The End of Traffic and the Future of Transport by Professors David Levinson and Kevin Krizek.  I’ve known David Levinson (The Transportationist) for about 15 years now – we grabbed lunch within a few months of him starting at the University of Minnesota.

Honestly, the book sat in my kindle for about a month.  I wasn’t excited to read an “academic” book about transportation.  My concern was completely unfounded. It’s very well written in plain English. I read the whole book in less than five hours.  I was able to skim through the historical opening sections because they were review for me, but they provide a great synopsis for the transportation novice.

The later sections of the book were thought provoking for me.  Three sets of data illustrated how our transportation world is significantly changing:

The conclusion from the above data is that the internet is significantly changing for retail related travel behavior.  (An aside – in addition to being big Amazon Prime users, my wife Jane has started using Instacart.com to get deliveries from Target, Costco and Whole Foods).

The one thought experiment in the book that has stayed with me is related to car sharing (Uber, Car2Go, HourCar, Zip Car, etc).  I’ve brought this up at least four times with colleagues in the last month:

Consider the leap in cell phone/smart phone technology compared to the relatively slow evolution of vehicle technology.  Smart phones have changed radically over the last three years, let alone the last 11 years a typical car is on the road.

Technology changes are accelerating in new vehicles.  Features such as backup cameras/monitor were only in luxury vehicles four to five years ago and are now standard in almost all vehicles.  As Tesla/Google/Apple nudge the automobile industry it’s very reasonable to expect the rate of innovation is going to continue to accelerate.

That innovation in fuel efficiency, electric technology, autonomous driving and crazier changes (like no steering wheel and having swivel seats with tables) will come a lot faster if the car sharing technology takes off and we move down the above bullet point chain.  It would be great for innovation if we turned over the automobile fleet every 3-5 years.

The above snipits give you a sample of what’s in the book.  I wholeheartedly give The End of Traffic and the Future or Transport five stars and think it’s a steal at $4.99.  Please buy it and read it.  You can thank me later.