As with most cities, the City of St. Louis Park in Minnesota has a Pavement Management Program to proactively address the conditions of its residential streets. As part of this work, the City’s city council directed city staff to look at all aspects of the neighborhood livability and “living streets” considerations as a part of their transportation projects. This review includes the streets, utilities, fiber, sidewalk network, stormwater runoff, traffic management, and tree preservation.

For the Elmwood neighborhood, city staff recognized the need for potential changes to the roadway network and began exploring options before the maintenance program work. They partnered with Spack Consulting in 2017 to explore the existing neighborhood network, develop improvements, and determine the impacts of these changes.

Working with the City, we first determined the goals of the project, which included:

Working with city staff, we developed a process designed to explore options and meet the identified goals. The summary of this process is: 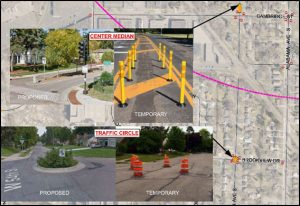 Here’s a graphic showing an example of graphics we prepared for the residential meetings. As you can see, we presented the locations of the proposed changes, how we would set-up a temporary version for testing, and what the final version could look like if fully implemented in the end.

Here are the five key lessons learned from this process:

Following our presentation in the webinar, we had a great discussion with attendees which lasted almost as long as the presentation itself. Here’s a sample of the many questions and answers related to the traffic calming experiment.

This webinar turned into a great discussion and back-and-forth about our process, the results, and advice for similar situations. We encourage you to listen for yourself and, of course, join us for our next webinar coming soon.