How to Get the Most Out of Congested Freeways

Key statistics related to ATMS based on the four federally funded pilot projects (including one along I-35W in Minneapolis, MN): 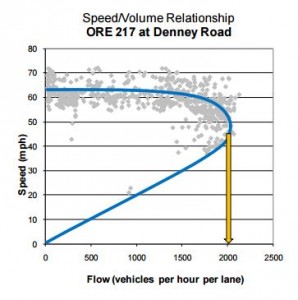 Traffic engineers are taught the basic relationship between flow and speed that’s shown on the right.  There’s a tipping point around 2,000 vehicles per hour per lane when speed greatly decreases and throughput greatly diminishes.  This is when we see stop and go traffic on freeways.  Applying ATMS strategies tries to get traffic moving at a speed/flow closer to the tipping point without going over the tipping point.