Counting Cars from the Sky: The Future of Traffic Monitoring 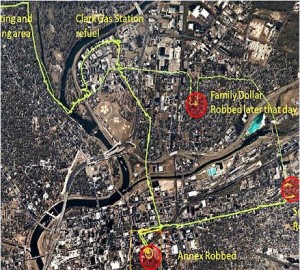 I’m a fan of Radio Lab’s podcast. Back in June they had a very interesting podcast called Eye in the Sky that talked about how Persistent Surveillance Systems uses planes to collect video over a city and then uses the video recordings to track criminals as they drive away from the scene of a reported crime.  Using this technology, they were able to locate the home base of a drug cartel in Mexico and help the local government disband the group.

They’ve had several very successful case studies, but haven’t been widely utilized by police departments – yet.  So, in the meantime, they’re trying to get into the business of providing traffic data. (and DataFromSky is trying to do a similar thing with unmanned vehicles – aka drones).

They aren’t ubiquitous in our marketplace yet either.  I don’t think they’re going to displace tube counters or on the ground video traffic data collection systems like COUNTcam anytime soon.

As a side note, I wrote about similar drone based technology in January 2013 titled The Future of Traffic Monitoring.  The security/defense branches of our government are definitely using this type of technology.  We need to be aware of all of the possible applications of this technology to our industry.  Like autonomous vehicles, I think it’s a matter of when not if.

What are your thoughts on aerial traffic data collection? Post your comments below.