Per square foot (KSF), Marijuana Dispensaries are proving to be one of the biggest retail traffic generators in the United States. The tables below show the traffic rates at marijuana dispensaries as compared to pharmacies and other small size retail operations as reported in the Institute of Transportation Engineers’ (ITE) Trip Generation Manual, 9th Edition. 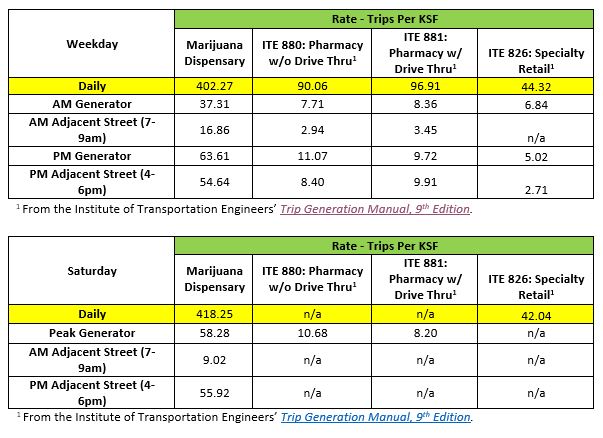 How do we know marijuana dispensaries are generating about 10x more traffic than a typical retail store and 5x more than a pharmacy?

The Spack Consulting team partnered with Melanie Banfield, owner and president of Ridgeview Engineering Consultants, LLC in Morrison, Colorado to record traffic videos using CountingCars.com’s COUNTcam products at the driveways of four dispensaries in the Denver, Colorado area. Traffic video was collected for three days at each of the sites and then we reviewed the video and counted the traffic at these dispensaries using our COUNTcloud service. You can get the full data set at www.TripGeneration.org.

Being able to accurately calculate the number of trips travelers make to specific destinations is the lifeblood of a transportation engineer. While the ITE Trip Generation Manual is the “go to” source for traffic engineers, the data collected and distributed in the manual has some limitations – including the age of data and limited or no data available on some land uses such as marijuana dispensaries.

ITE  recommends in their Trip Generation Handbook that engineers collect current, localized trip generation data to use in their analysis. At Spack Consulting we feel strongly that not only should engineers collect localized data for use in their specific project, but also openly, and freely share that data to benefit everyone. This is why we created TripGeneration.org – a free website with more than 4,080+ hours of professionally collected traffic data for popular land uses. 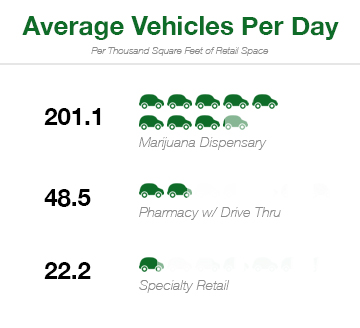 Currently four states — Alaska, Colorado, Oregon, and Washington — as well as in the District of Columbia have legalized the recreational use of marijuana. But 23 states have legalized marijuana for medicinal purposes which opens the door to expanding its use for recreational purposes, creating a potential boom in the development of dispensaries. Thus the need to data on specialty land uses like marijuana dispensaries.

One outstanding question is what is driving the high trip generation numbers. The high trip generation rates for marijuana dispensaries may be due to their newness. Krispy Kreme stores generated tremendous amounts of traffic when they first opened in Minnesota. Traffic died down after the newness wore off to the point where the Krispy Kreme stores are all out of business in Minnesota fifteen years later. We’ll monitor the traffic generated by marijuana dispensaries to see if their trip generation rates decrease. We’ll also work to add data from dispensaries outside of Colorado to make sure there isn’t a location bias in the data.