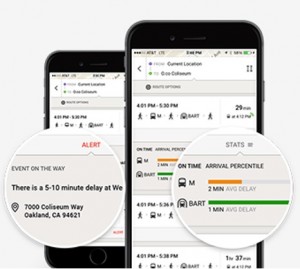 Urban Engines is a mapping app that helps you decide what route to take.  But more than a Google Maps, it combines your transportation preferences (i.e. are you willing to walk or bike) with big data to help you make the best decision on how to get from A to B.  I used it on my recent trips to Seattle and Vancouver and I liked it more than using my default Google Maps app.

For example, Urban Engines worked with the transit agency in Singapore to reduce peak congestion.  They analyzed transit card swipe data and identified several peak period bottlenecks.  Then they developed a pilot project to incentivize transit riders to travel outside those bottlenecks.

The program gives transit users points for the number of kilometers traveled that can be redeemed for future discounts with bonus points for traveling outside of the peak.  They also ran a small raffle program to make the incentives more of a game.  All of this is administered through the Urban Engines app.  They recorded a 7-13% reduction in peak travel with 200,000 commuters participating according to this Fast Company article.

Urban Engines is working with several other agencies around the world and I believe they have a huge opportunity to nudge traveler behavior.  There’s a very smart team of data scientists behind Urban Engines (Stanford PhD’s/Google executives) and they have tremendous venture capital behind them.  If I ran a highway department or transit agency, I’d be reaching out to them to see how they could help better manage the demand for my system.