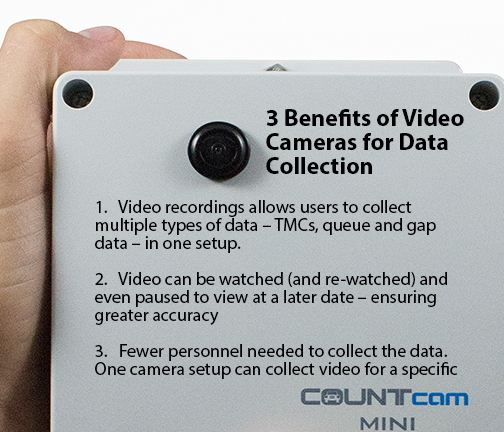 At Traffic Data Inc., we are frequently called on to do turning movement counts for local cities and developers. But recently, we were hired for a large data collection project on a county highway in southern Minnesota. What was unique for this project was the types of data we needed to collect:

What made this project particularly challenging was that this data needed to be collected all on the same day with the purpose of being able to accurately calibrate software models of the corridor. As is the standard for Traffic Data Inc., we used COUNTcams video recording systems for this project and we were able to complete this project with only two field personnel plus several staff members in the office.

The amount of field personnel required to collect all of this data on the same day without video cameras would be about 25 people. These people would need to be on site, about a 90 minute drive from our office, for the entire day.  Factoring in scheduling and field training, it is easy to see how this could quickly become a very complicated and expensive project. Using a video recording system drastically reduced our time in the field and gave us the flexibility to use the video to collect sets of data.

Using videos collected at each intersection, turning movement counts were conducted in the office while watching the video at accelerated speeds using COUNTpro software.  Individual intersection peak hour times were then found and the queue and gap studies were completed using videos for those particular peak hours.  If this data was all collected using field personnel on one day, the peak hours for collecting queue and gap data would have to be guessed at ahead of time.

For collecting queue data, COUNTcams were set up on each of nine intersection approaches.  Each camera was placed at an angle to easily see each lane from the stop bar to a good distance away.  Using the captured video, the number of stacked cars in each lane was recorded every 15 seconds during the peak hours.  The ability to pause with the video significantly aided accuracy and fast-forwarding between each 15 second interval reduced the overall time spent collecting the data.

Queue Data Tip:  Point the video camera down the road, instead of directly at the intersection to collect queueing data.

The videos collected for the intersection turning movement counts were able to be re-used to complete the gap studies. In this case, the video was watched while the time between cars (i.e. the gap) was recorded.  The gap study required watching the video in real-time, but our process was aided by knowing specifically when the peak hour started and ended based on the completed turning movement counts.

Though Traffic Data Inc. has performed queue and gap studies before, having them both in the same project plus turning movement counts illustrated the benefits and versatility of using a video collection device like the COUNTcams.  Having the videos of each intersection and many of the approaches allowed our client to calibrate and fine-tune their software models against the actual measurable operations in the field.  When this type of accuracy is required, there’s no better system to use.