Complete Street Policies are being discussed at almost every level of local agencies for big and small cities alike. The National Complete Streets Coalition, is a program of Smart Growth America, a national organization at the forefront of complete street discussions and helping communities implement best practices across the nation.

Recently, they released a webinar titled, The Best Complete Streets Policies of 2015, presenting the 16 best Complete Street policies of 2015. The webinar covered the basic history of complete streets in the United States and the progress made in the national level in 2015, along with a brief summary of each award recipient’s policies.

Here are a few of the key takeaways from the presentation. 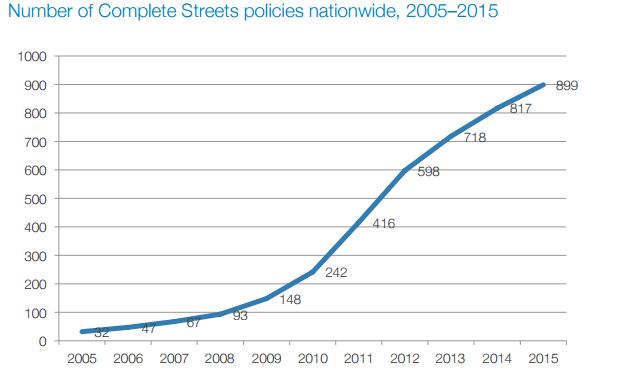 While the beginning of the webinar provided interesting insights into Complete Street policies as a whole, the webinar didn’t leave enough time to provide meaningful insights into the 16 cities identified as having the best policies. If you are interested in learning more about the top 16 cities (Reading, Pennsylvania scored at the top of the list), click the link to download the Best Complete Street Policies of 2015 report.

Do you have a great Complete Streets resource you frequently reference? We would love to hear from you. Leave a comment below.