What is the Value of Long Range Forecasts?

This is a guest post from Bryant Ficek, PE, PTOE who works at TKDA.  He co-authored the Traffic Study Manual with me and will occasionally write posts about projects he’s working on.  The reader survey I did last year asked for more case studies and guest posts.  Here you go!

As I developed the scope for a recent Traffic Impact Study, I found myself pondering specific recommendations of our state. The Minnesota Department of Transportation (MnDOT) pushes agencies and consultants to provide 20-year forecasts and evaluations as part of an impact study. My response – what value would that serve? 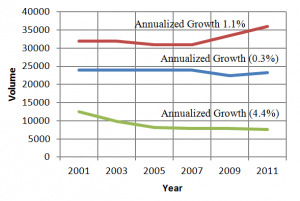 To give some details, the proposed development (expected trip generation of 8,600 new daily vehicles) we are studying is one of the last open parcels in a heavy retail area. The roadway network around the area has multiple through lanes, dual left turn lanes, right turn lanes, and traffic signals at the major intersections. The historic average annual daily traffic volumes confirm that traffic growth in the area is low or non-existent (see chart for daily traffic volumes on major road corridors in the study area). In essence, the area is almost fully built out, which is similar to some downtown and other urban areas.

Standard practice in Minnesota would apply a generic background growth rate to the existing volumes to increase traffic to the study year. Usually based on historic growth, generic background growth increases traffic into the future to help an agency plan for the future and envision the potential transportation network. They can also assist with determining the timing of improvements, like when to add a parallel route or additional connector/collector roadway in the area.

In a rural or developing area with lots of open parcels, using a generic growth over 20 years helps to forecast traffic when the specific developments are not known. But in a developed area, that situation no longer applies and traffic is just as likely to decrease (due to new development in adjacent regions that draws traffic away) as increase (due to existing developments drawing new traffic). And assuming more growth than could be reasonably expected to occur may lead to recommendations that waste money on unneeded improvements.

So back to my question, what value is there in performing long-range forecasts in this situation? We initiated a discussion with MnDOT and the City on this point and had a great conversation. To their credit, everyone recognized that 20-year forecasts under these circumstances would not best serve the area or the proposed development. The proposed development will be driving most of the traffic growth. Instead, they accepted my recommendation to study the year after opening (also standard) and a shorter term forecast of 5 years. In this manner, we were able to analyze expected operations with some background growth (assuming about 1 percent annual growth matching the highest ten-year growth street in the area) and new traffic associated with the proposed development. The relatively simple mitigation we subsequently determined will then benefit users today as well as providing some extra capacity for the future.

Take time to consider what you expect to get out of long-range forecasts based on generic growth in your specific situation. Exercising your engineering judgment in regard to a standard or recommended practice, is the best way to ensure your client, the governing agencies, and the taxpayer get the best use of the limited resources available.