In Vancouver, we stayed on the 21st floor of a newer condo building a few blocks from the iconic Science World complex.  We had a gorgeous view of the harbor, mountains and city.  If we can afford it someday, Jane and I would love to live in a condo like that.  Maybe even in Vancouver!

Being the geeky traffic engineer I am, I immediately looked down at traffic from our balcony.  To my surprise, I had a bird’s eye view of a hybrid intersection I hadn’t encountered before.  I couldn’t quite tell what was going on from the balcony so we had to go see it on the ground.

It was a right-in/right-out intersection with raised concrete medians, but there were slots in the medians to allow pedestrians and bicyclists to cross the intersection even though vehicles couldn’t.  The intersection is East 2nd Avenue and Ontario Street if you’re curious.

They installed a HAWK signal at the intersection to stop mainline traffic for pedestrians and bicyclists who wanted to cross.  It didn’t look like there was automated bike or ped detectors, just push buttons.

There was definitely consistent bicycle traffic, but I’m not sure the volumes justified the intersection configuration.  My hunch is the intersection was installed for the 2010 Winter Olympics in Vancouver.  The Olympic Village was just a few blocks northwest of the intersection with neighborhoods to the south.

Here are some photos of the intersection.  Have you seen an effective use of HAWK signals? I would love to hear from you. Leave a comment below. 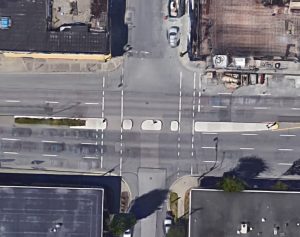 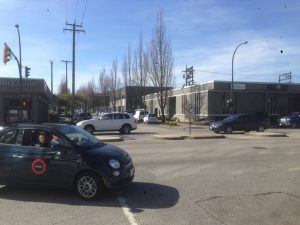 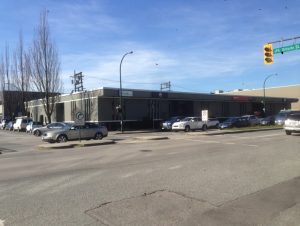 And here’s a photo from a similar intersection, but it had side street stop sign control instead of a HAWK signal. 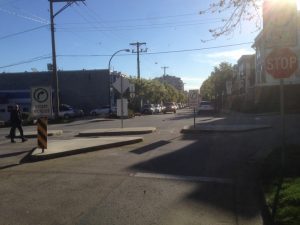