Following is a guest post from Chris Reid with the Springdale Neighborhood Association in Stamford, Connecticut regarding their experience with PARKing Day.  I love the experimental nature of what Chris and her neighbors did with this temporary traffic control implementation.  If you’re interested in making residential streets more livable, I recommend you follow-up by reading and oldie but a goodie –Street Reclaiming by David Engwicht.  Thanks to Chris for sharing!    ~Mike

Our goal is to convince our city to let us pilot a seasonal in-street garden as a way to provide meaningful green space in fully-developed areas underserved by parks or community gardens, while – with careful design – contributing to traffic calming and diverting.   A 2007 traffic calming report with comparatively high implementation costs and steep rules for adoption attainable by very few areas in need is still on the shelf.  Is the perfect the enemy of the good?

As a way to send up a trial balloon, the Springdale Neighborhood Association in Stamford CT participated in Stamford’s one-day PARKing Day event on September 16, 2016, (where downtown parking spaces are converted to people spaces in areas deemed “vibrant”).

We deliberately built the popup street garden on a low foot traffic street plagued by fast-traveling cut-through traffic.  The goal was to entice people to the space and gather initial neighborhood feedback on a seasonal garden idea that might serve multiple purposes:  to provide much-needed green space, increase community connectedness, and also serve traffic management purposes.

Using pooled furniture and plants we set up the garden in about 1.5 hours.  The only citizen outlay was for homemade cookie ingredients.  The cost to the city?  Labor to deliver and pick up four traffic sawhorses.

Visitors young and old from the area, including residents from 11 of 29 homes on the street, came by  on a weekday and tried sitting “in the garden” on benches to enjoy cookies and tea, surrounded by ferns and a birdbath,  with the street hidden from view.  Neighbors who usually stayed on their properties came out and met at the popup garden, including some who had lived on the same street for years without meeting.

“It was such a beautiful and peaceful place to sit and chat with neighbors that we had not yet had a chance to get to know…”
“A place of peace and serenity…”
“Beautiful, cozy and calming!”
“Beautiful – so nice to sit in!”

Have you ever seen that written about a parking space before? 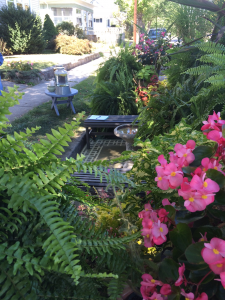 As dusk fell, creators lit candles in jars and placed them into the birdbath to reflect their light.  It was magical.

We found that a little green space can go a long way.  Tricycle traffic to and from the garden and its cookie plate increased exponentially! Can we convince the city it can do more, and do it quicker, with far less money using our citizens’ approach?  Stay tuned.