Thanks to Denny Eyler, from SRF Consulting, for the following comments related to our Reduced Conflict Intersections post. Denny has significant experience with these types of intersections and we had a good email exchange over them. I think you’ll find his thoughts helpful and think they are worth a post instead of just adding them to the comments section. Please note the jargon contained in his post: ITE (Institute of Transportation Engineers), DOT (Department of Transportation), RCI (Reduced Conflict Intersection), RCUT (Restricted Crossing U-Turn).

I like the information in your post on the Super Street intersection.  I also like that you call it a reduced conflict intersection.  I was the one that originated that term for a presentation I made at the International ITE meeting in Nashville in 2000.

After the year 2000 I was in contact with the North Carolina DOT and NC State people about their developments of the Super Street.  I drove their US 17 corridor near Wilmington.  Texas is also using the design.  Utah has an interesting intersection design called a ThrU-turn as shown. 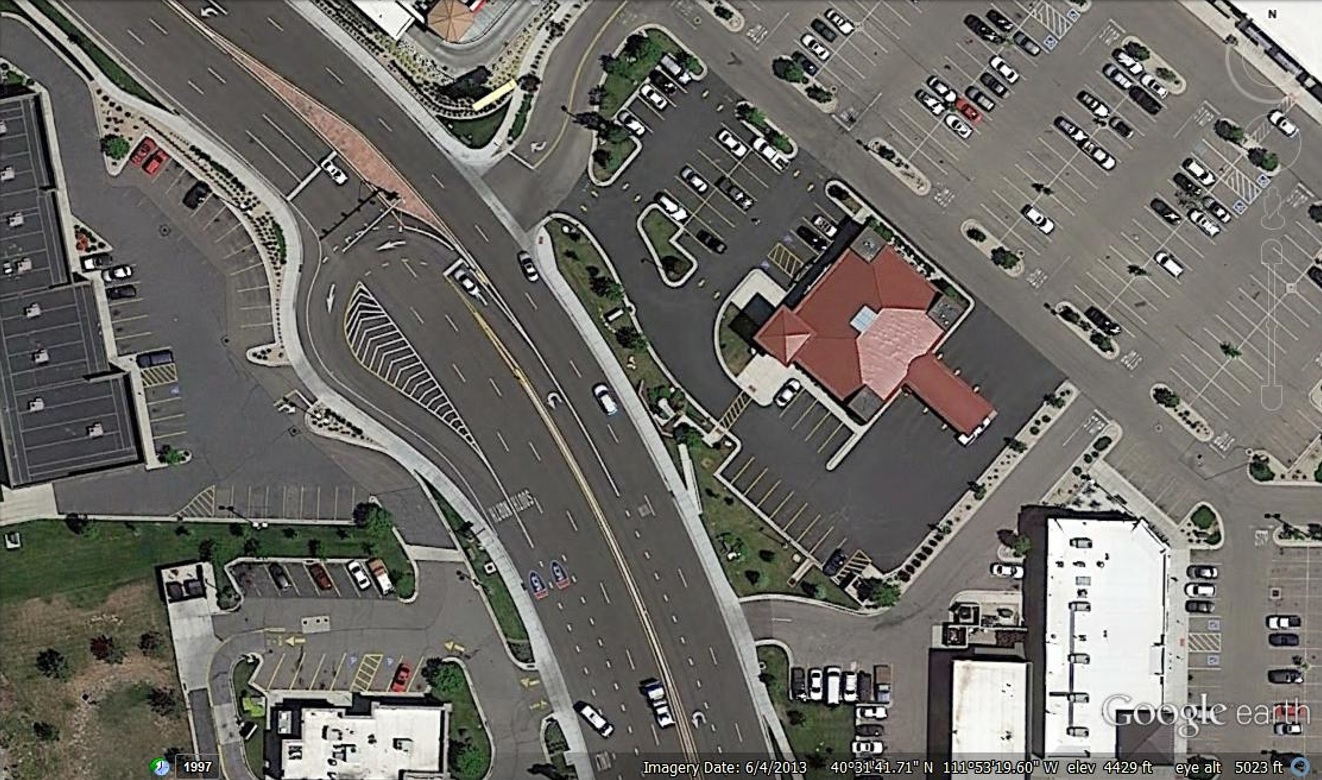 The RCI you show is an RCUT with signals.  I also think it would be a great tool to use on an expressway with high directional peak flows because a different cycle length could be used in each mainline direction.  The RCI does not work as well where the cross-street throughs and lefts have high volumes.  There is a low-cost interchange design that works with the Super Street concept to handle an isolated high volume junction, per below.

The key to the design is that while it separates the heavy conflicts, it does not break the pattern of the corridor, which is; to turn left, stay left and to turn right, stay right.  The controlled entry points also avoid the problem of typical entrance ramps entering a signal controlled corridor which is the mixing of free flow traffic with pulsed flow traffic and thereby creating weaving problems.

This general form of interchange is referred to as a “windmill”.  They are used at locations where neither roadway is a freeway.  They either have four exit ramps or four entrance ramps.  There are also hybrid variations.

You mention lower delays, which would just be the time spent at the stop line.  However, travel times will increase for the cross-street throughs and lefts by over 40 seconds, due to the added travel distance, even when traffic is light.

Another feature that can be added are flashing yellow left turn and U-turn controls.  Those turns could be programmed to rest in flash yellow until queue and/or delay detectors place a call to cause the opposing mainline to go to yellow after its gap out.  The State of Maryland has used this system, although their state laws require them to use a flashing red arrow.  There are also some timed overlap options that can be used so through vehicles or heavy cross street lefts are “progressed” through the second signal.

Following is a picture of perhaps the “ultimate” RCUT.  It’s in Maryland on route 3 near Odenton. 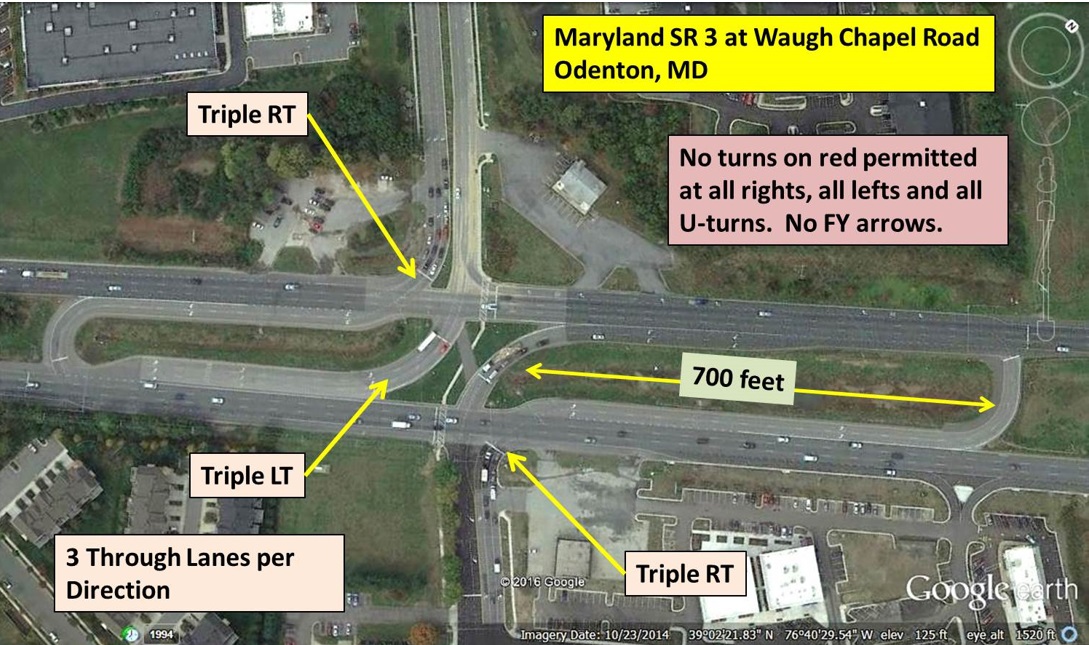 Also, there is a design option for the central intersection of the RCUT which also provides for a U-turn at that same location, shown below.  The idea comes from Maryland and would be used if there were driveway or minor street access just upstream and you didn’t want to send the U-turning traffic down to the next U-turn crossover.  Minnesota typically has good access control, so its use may be limited. 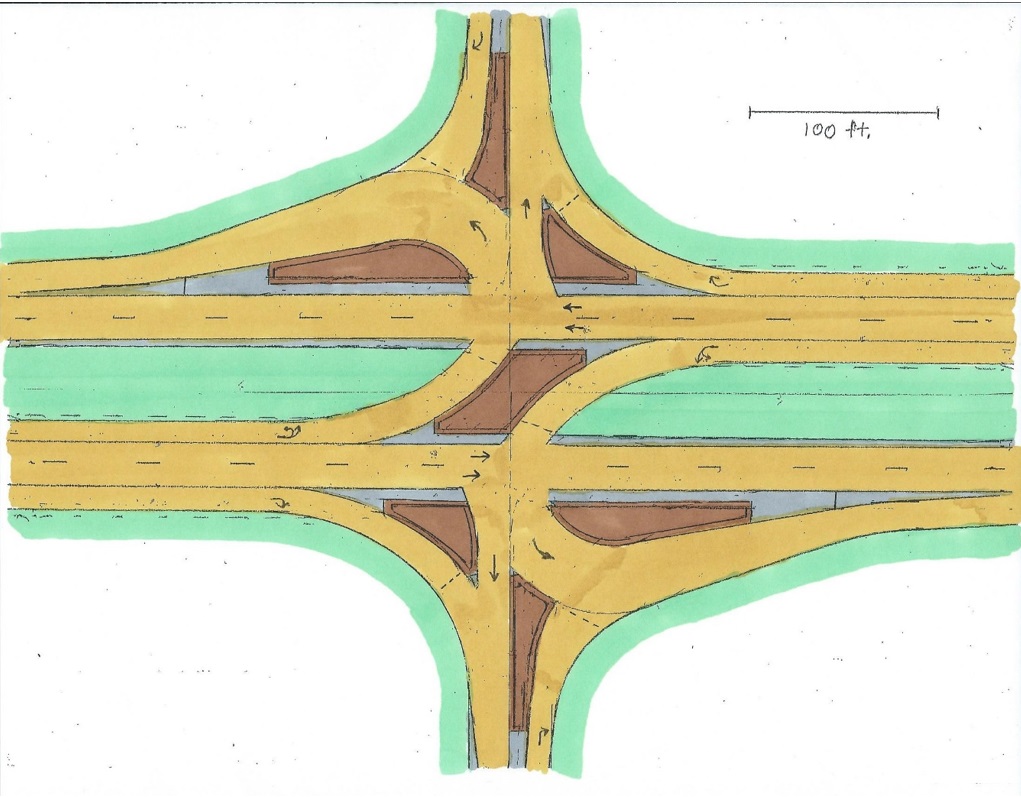 Thanks again to Denny Eyler for keeping us on our toes and expanding upon an interesting subject!

Do you have an idea for an article? Would you like to be featured writer on MikeOn traffic? Contact us at mspack@MikeOnTraffic.com