Over the past ten years, there has been a renewed interest in urban revitalization by many cities. The goal is to drive new economic opportunities in the heart of their downtown areas. At the same time, this renewed interest in the downtown areas has challenged the previous “auto-centric” design of the transportation systems that focused on moving cars above all else.

One City that undertook this challenge is Albuquerque, New Mexico. The City Council was interested in driving redevelopment in their downtown. This meant finding ways to attract offices and retailers to locate to the heart of the city, while creating an environment that encouraged people to live downtown or hang around after business hours. As part of the effort examining the needs of the downtown area, a walk-ability study was conducted by Jeff Speck, a well-known city planner and urbanist who has assisted many cities with improvements to pedestrian environments.

[Watch the our webinar on Removing Unwarranted Traffic Signals]

Albuquerque’s streets were currently designed for the efficient flow of traffic through its downtown area. Although previous efforts had increased transportation options with transit routes and a bike boulevard, the large network of signals along with a few one-way couplets did not create a pedestrian-friendly experience. The study made it clear that the traffic signals were causing excessive delays for pedestrians and was a primary cause of the low walk-ability evaluation. 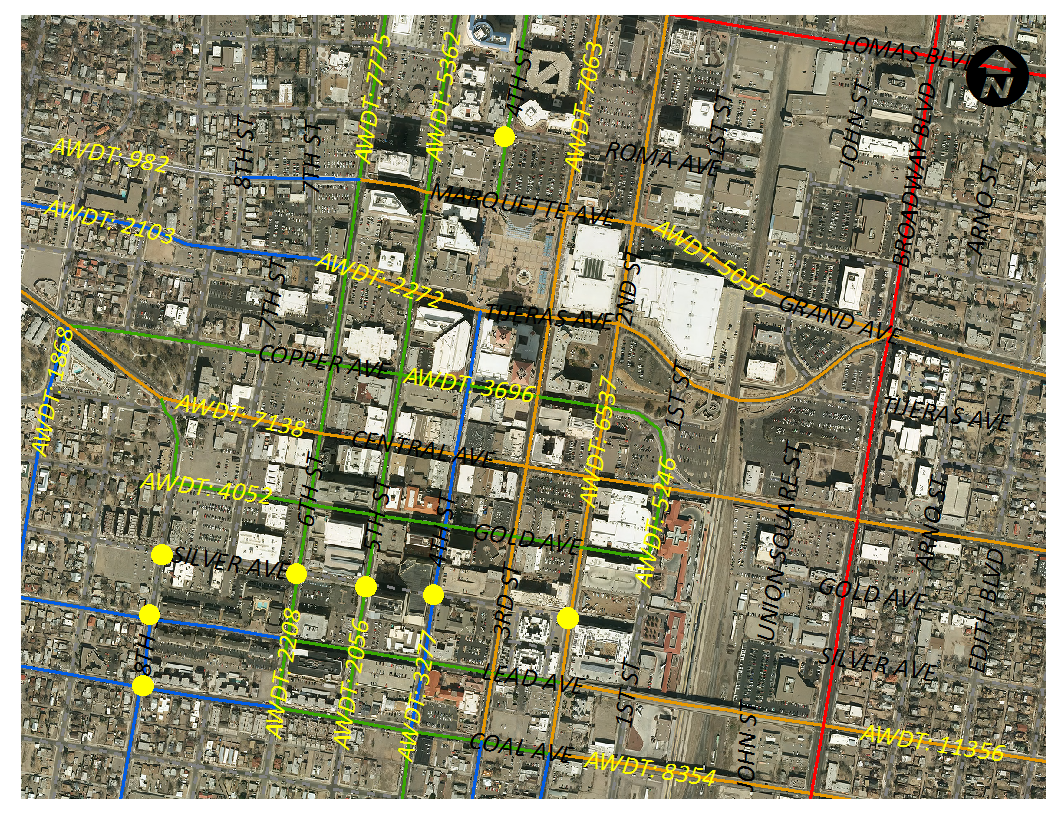 Focusing efforts on one main corridor, Silver Street, the City Council and city’s traffic engineers discussed the possibility of removing some signals in favor of all-way stop controlled intersections. Key information regarding the corridor included:

Eventually, nine intersections were identified as candidates for a transition from traffic signal to all-way stop control. The goal of the change in signalization was to reduce the amount of time pedestrians spent at an intersection waiting for a signal, making it easier for pedestrians to access offices and retail store fronts. An analysis of traffic flow at these intersections proved acceptable and the decision was then made to test the concept.

The plan was to complete a six-month test run and evaluate the impacts on pedestrian and vehicle travel. Thus, the test is still in its early stages. Initial observations are positive. The traffic flow seems to show an unexpected improvement in left turning movements, particularly for intersections without a dedicated left turn lane. A citizen who usually questions city decisions provided positive feedback, stating they personally felt it was easier to get around with the all-way stops. Observations show, in general, when a pedestrian approaches the intersection, motorists stop and allow the pedestrian to complete the crossing, then motorists resume negotiating the intersection. This has led to a decrease in pedestrian delay at the intersections as expected.

For the most part, drivers are respecting the new stop signs and stopping appropriately. However, the city is exploring additional signage as countermeasures for the small number of drivers who may not have noticed the traffic control change.

While removing traffic signals is not a common practice, we are excited to see this type of test and hope it encourages other cities to explore new options to embrace pedestrian needs.